Is it the end of the road for the SFO?

The Conservative Party has pledged in its manifesto to incorporate the Serious Fraud Office (SFO) into the National Crime Agency (NCA). As Home Secretary, Theresa May twice tried unsuccessfully to restructure the SFO. In 2011, she proposed sending the SFO’s investigators to the NCA and its prosecutors to the Crown Prosecution Service. In 2014, reports surfaced of her seeking to roll the SFO into the NCA. Leaving aside the outcome of June’s general election, it still remains to be seen whether and/or how the government delivers on this pledge. One possibility is that the SFO becomes housed within the NCA’s Economic Crime Command unit (ECC). The ECC is presently tasked with the broad objective of reducing the impact of economic crime (including the financing of serious and organised crime). It is made up of a number of primarily intelligence-oriented units including the International Corruption Unit, UK Financial Intelligence Unit and Economic Crime Intelligence Unit. Of the five principal divisions within the NCA, the ECC’s areas of interest are most closely (albeit not perfectly) aligned with those of the SFO.

It is premature to assess the likely impact of any threatened changes to the SFO model. A central question will be whether the investigation and prosecution of white collar crime is rendered more or less effective by the changes. Unlike the SFO, the NCA does not currently have any power to prosecute the commission of criminal offences. Concerns have already been raised that incorporating the SFO within the NCA will dilute the SFO’s potency (by co-mingling the investigation and prosecution of serious and complex economic crime with the vast array of other activities currently performed by the NCA) and compromise its independence (by subjecting its work to the political direction of the Home Secretary). On the other hand, it is possible that, like many mergers, the incorporation of the SFO into the NCA gives rise to cost savings and economies of scale that make more resources available for the fight against white collar crime. As the table illustrates, the NCA’s resources already dwarf those of the SFO.

A restructuring of the SFO will raise a number of practical questions. For example: how much of the erstwhile SFO will survive within the NCA; will the “Roskill Model” of investigators and prosecutors working together from the start of a case continue; and how will existing SFO investigations be handled under the new regime? Perhaps the biggest question will concern the future of deferred prosecution agreements (DPAs). To date, the SFO has been the chief architect of the DPA regime. It is the only prosecuting authority to have concluded a DPA and, aside from the Director of Public Prosecutions, is the only prosecuting authority permitted to do so under the Crime and Courts Act 2013. If the SFO is to disappear within the NCA, law makers will need to consider who should be entrusted with the survival of the DPA regime (if it is intended to survive at all). 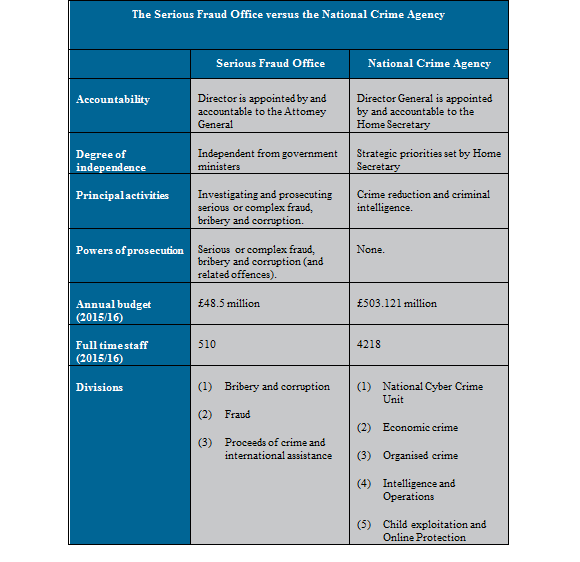