Shared Parental Leave - A personal view by a father

It wasn't long ago that Shared Parental Leave (SPL) was introduced and I was advising clients about the complex set of new rules and assisting them in implementing them in a straightforward fashion that could be easily understood by employees (no mean feat). This proved rather useful when in January this year my wife, Laura, gave birth to our first baby. We had a little boy and called him Dylan. No, we aren't massive Bob Dylan fans and I couldn't name a single poem by Dylan Thomas – we just liked the name.

We had previously discussed the idea of me taking SPL, but only agreed that I would do so following Dylan's arrival. Readers will no doubt know that Shared Parental Leave was introduced in April 2015 and gives parents the right to split the traditional 12 months' maternity or adoption leave and pay, if they qualify. Leave can be taken in up to three separate blocks of at least a week each, and can either be taken at the same time as your partner or at different times. I opted to take six weeks' SPL at the same time as Laura, and I am lucky enough that Allen & Overy enhances the statutory pay rate so that I could take this time on full pay. 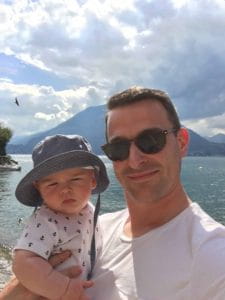 It is fair to say that SPL has not been welcomed with open arms by all commentators. It is said that it doesn't go far enough, it should be a separate independent right for fathers (like in Sweden and Iceland), it doesn't work financially for many people and it is too complicated. As a result, a low take-up of SPL was expected, and there have been various recent press articles referring to the low take-up of SPL – some headlines referring to take-up rates of just 1%. However, when one delves a little deeper the 1% statistic referred to was actually a percentage of all male employees and not just those entitled to take SPL, which would have given a higher and more accurate take-up rate. Undoubtedly, the take-up figure would be much higher than 1% if eligible men were surveyed. In my NCT group, three out of seven dads are taking SPL – that's more than 40%. The view that dads do not want to take time out from work to care for their children is no longer commonplace or accurate.

The criticism of SPL may well be justified and there is no doubt that more needs to be done to change the traditional view of childcare responsibilities and to help achieve equality in the workplace. It's easy to refer to the Swedish and Icelandic models of parental leave and point out the flaws in relation to SPL. However, to do so misses the point. SPL is a significant step in the right direction and, together with other initiatives like Gender Pay Gap reporting, it will drive equality in the workplace.

My personal experience of SPL has been life changing. It has been tough and very tiring, but rewarding. I am not claiming to be a trailblazer – I only took six weeks off together with Laura. I would have taken more if I had been a better negotiator with my wife, but ultimately Laura is the boss and there was a limit to how much of her maternity leave she was willing to share with me. Of course, this is one of the problems with SPL.

During my six weeks' SPL my relationship with Dylan has been transformed. That is not to say that it was in a bad state beforehand – I was fond of the little guy and I think he liked me too – but it was a different relationship to the one we now enjoy. Over six weeks, we have spent every day together and I know him so much better than I did before. I was there to see his first roll, we went swimming, to rhyme time at our local library, to the big scream (baby cinema – we saw The Nice Guys), we took him to meet his great grandma, had our first family holiday, started the messy and hilarious process of weaning, enjoyed bath time every night, and generally spent quality time together as a family. I know when Dylan is tired or hungry, I know his favourite songs and toys, I know his tickly spots and how to make him laugh, I know when he is bored and when he is frustrated. Because of this, I am more confident in caring for him, it is easier and we have lots more fun. It will be difficult to go back to seeing Dylan mainly at weekends, there is no doubt about that. However, I feel privileged and very grateful to have had this time with him. I would definitely take SPL again if we are lucky enough to have more children in the future and I would encourage all parents to at least consider it. The benefits to both you personally and to the wider drive for equality are tangible.

It's not only my relationship with Dylan that has benefitted. I have returned to work reenergised and ready to get stuck in. The support of my colleagues made the decision to take SPL much easier. SPL also helps to make family issues gender neutral. I hope that employers recognise the importance of SPL, both to the individual and also because of the wider societal benefits that will flow from a change in the way we view childcare responsibilities.

My return to work has given me a very small window into how it feels for employees returning from maternity or adoption leave. It is a strange feeling coming back to the office and seeing that things have moved on without you (even after six weeks). There needs to be a wider appreciation and understanding of how difficult it is for employees to return to work after maternity or adoption leave. It can be daunting but this new perspective makes me a better, more rounded, lawyer.

The last word must go to women who have had to fight hard for equality in the workplace, in part because they have to take time off for family responsibilities. I have gained a whole new level of respect for Laura and all other mums and primary caregivers out there. Raising a child is a relentless, tiring and sometimes thankless job. Dylan is extremely lucky to have such a passionate, caring, loving and patient mum, and with my new-found skills and knowledge I can genuinely say I bring something to the team as well. I am optimistic that in time, workplace and family gender stereotypes will be a thing of the past because of initiatives like SPL.

And thankfully, SPL right does not derive from EU law, but is the gift of our own Government so is likely to remain in any post-Brexit regime.