The year 2010 saw a steady resurgence in deal activity in the TMT sphere, with M&A volumes and values back up to 2008 levels. 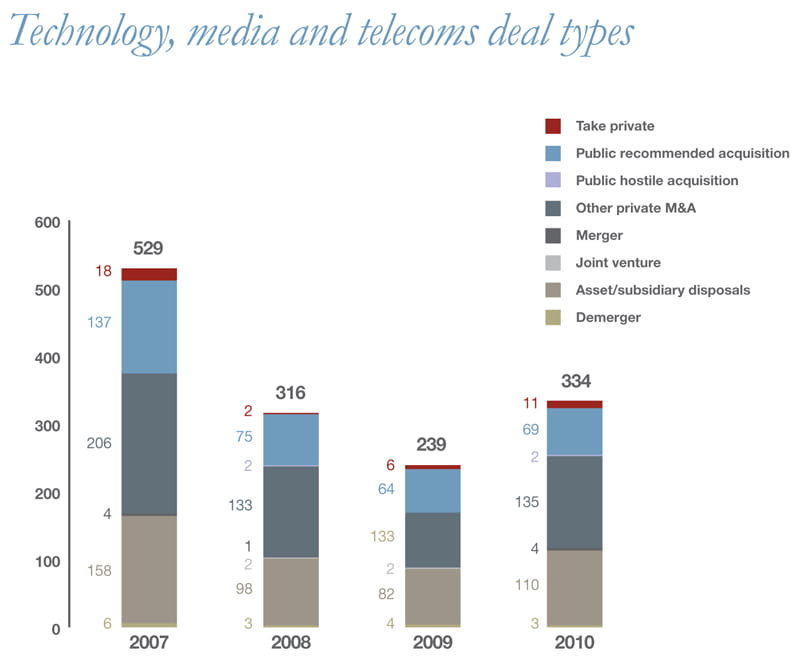 All over the world, 4G may provide a viable alternative to expensive rollouts of fixed-line internet access. In Europe, the arrival of 4G and the release of ‘digital dividend’ spectrum is likely to affect markets, both with the cost of spectrum made available for 4G and the consequences for the operators who do not acquire licences. Nonetheless, it seems unlikely to result in the kind of industry restructuring that followed the 3G auctions 10 years ago. In developing markets, licensees with unused spectrum may present attractive targets, on the basis that a customer base can be acquired with marketing, but spectrum is finite.

The telecoms sector in Q1 2011 will be influenced by turmoil in the Indian market, with the highly-politicised criticism of the awards of the new-entrant 2G licences. The furore has already resulted in the resignation of the former telecoms minister and many stakeholders are seeking to influence the effect on the licensees. Not only is the Indian market large in itself, with many operators highly leveraged, but the outcome could also result in significant losses for the listed international operators who have invested in India, with the effects being felt in several countries. The Etisalat Zain transaction is also due to complete in Q1 2011, creating a powerhouse in Middle East telecoms, and resulting in a change in ownership of one of the Saudi operators.

Some global operators may also look again at their emerging market portfolios, deciding whether their attentions are better focussed on South-East Asia, or India rather than on Africa. Where global coverage and the size of the subscriber base have been important metrics, some operators may decide that the constant management attention required by uncooperative host governments is too much of a distraction, but for others this is a sweet spot. In Africa, as Bharti begins to digest the Zain Africa acquisition and overhaul operating costs, competitive pressure on single-market operators will increase and may force consolidation. We may also see a turnover in the private equity investment cycle, such as the exit from TDC, which will test the equity markets.

At the cross-over between telecoms and technology, the equipment manufacturer field may reduce from its current five major suppliers. Certainly, China’s Huawei is gaining ever greater market share, and the CEO of Nokia Siemens Networks has said there may be room for only three major players in this market. The smartphone/PDA/tablet market remains extremely competitive, and it is possible that there could be consolidation in this part of the equipment market as well, with perhaps Google or Microsoft making an acquisition, although that may not occur as early as Q1.

Media is likely to see traditional content owners looking with increased urgency at digital distribution, and possibly even seeking acquisitions of user-generated content distributors, to remain relevant. At the intersection of technology and media, the used-to-be-start-up Google may need to make significant acquisitions to maintain growth inorganically as it diversifies from search, and someone may yet work out how Twitter fits into a business plan.