In 2010 the life sciences sector saw a steady increase in deal activity, but a decline in values compared to 2009. 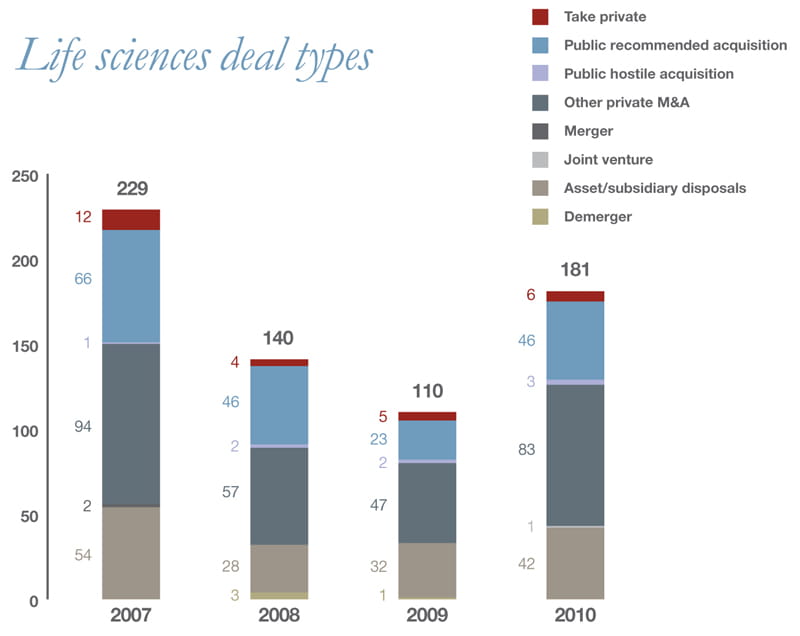 The M&A focus was on private company divestments, particularly in the first quarter, and private company acquisitions, both of which in volume terms were up considerably on 2008 and 2009, while still lagging behind the 2007 highs.
Unsurprisingly, given the decline in value, the number of public bids, both recommended and hostile, was down considerably on the four prior years, reflecting continued caution in dealmaking as companies looked at small to mid-size highly targeted acquisitions. We saw the re-emergence of joint ventures, something we could well see more of in 2011, as companies sought to achieve distribution efficiencies, reduce cost, spread risk and enter new markets.

In an industry that has very long-term horizons the challenges, particularly in developed economies, are well known: blockbuster drugs soon coming off
patent; the cost of getting new drugs to market continuing to increase; the insurance companies and governments that bear a large part of the cost of medical care demanding cost savings; and an emphasis on prevention and ‘wellness’ strategies. Thus, especially in mature markets, M&A in 2010 was about plugging gaps, and boosting pipelines, through the acquisition of small biotechs, and the acquisition of specific product portfolios.

In large pharma we saw a move towards diversification and a desire to achieve reliable, rather than spectacular, income streams. These trends are likely to continue. Despite the emergence of new markets the U.S. will continue to dominate the sector in the immediate term, and although the impact of the new healthcare law is as yet unknown, we are likely to see a drive to contain costs. In the short term this will probably be reflected in increasing standardisation of data, records and procedures, which can deliver efficiency savings without hitting margins. Correspondingly, we are likely to see a consolidation of players in those areas.

On the growth side, the emerging markets are spending unprecedented sums developing their healthcare infrastructure. Historic under-investment, and increasing middle-class populations, have led to pent-up demand for healthcare infrastructure, service and products. Government and private money is being invested in hospitals, nursing homes, laboratories and research and development facilities in China, the Middle East, Turkey, India, Brazil, Russia and elsewhere, which will inevitably boost demand for pharmaceuticals, medical devices and related technology, services and personnel.

The gravitational pull of deal activity from developed to emerging markets that we have seen in 2010 is likely to accelerate in 2011, both in inward investment into those markets and in outward investment from those markets as indigenous firms seek to meet the needs of their domestic markets by acquiring and then expanding the capability of existing suppliers from elsewhere. This will present opportunities for joint ventures and ‘hybrid’ firms, as foreign companies entering those markets find it most efficient to work alongside a domestic partner.

But don’t discount the developed economies: the governments of the UK and Japan have both recently announced tax and other incentives designed to stimulate private research and development spending in the life sciences sector, hoping to generate and retain the knowledge-based highly skilled jobs that are necessary for growth. Although the incentives on offer are unlikely to match the scale of investment being made in the emerging markets, the competition for life sciences expertise can only bode well for the sector in 2011.