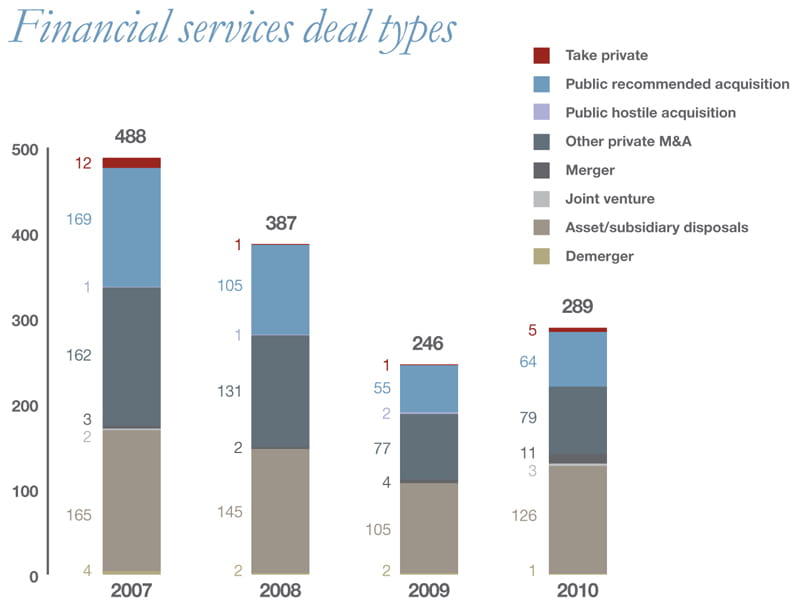 The volume and value of M&A in the financial services sector remained steady in the fourth quarter of 2010, as the sector stayed tentative about major acquisitions and a mismatch in price expectations put off the small rank of potential bidders for assets that were up for sale.
The vast majority of M&A activity continues to be driven by regulatory change on the sell side, and by cautious opportunism on the buy side. Government mandated disposals that occurred in the wake of the bank bail-outs are now largely complete, and we are now seeing the affected institutions moving out of non-core activities, streamlining operations and reorganising their balance sheets of their own accord.

The sovereign debt crisis that hit the Eurozone in 2010 has dented confidence, but the historical threat to financial institutions of their government’s sovereign defaults has been, to date, averted by the European Central Bank’s bond purchasing scheme and the EU’s rescue fund. The spectre of further bank nationalisations and the disposal of ‘bad bank’ assets will, in due course, undoubtedly lead to further M&A as buyers are sought.

The burning issue for the financial services sector is where the buyers will come from for these assets, and to date we have seen interest from the few Western institutions that emerged relatively unscathed from the crisis, and from banks in the emerging markets. Buyers from the BRIC economies of Brazil, Russia, India and China are actively looking at opportunities. It is hard to call the extent to which these banks are ready to acquire overseas assets given the strength of their home markets, however. China’s ICBC acquired a 20% stake in South Africa’s Standard Bank in a deal that appears to have been successful, but previous investments in financial institutions in Western economies suffered badly in the aftermath of the credit crisis and those memories may yet linger
for a while.

Within the sector, the hottest areas of M&A activity have been in asset management, private banking and custody. These markets are less capital-intensive and benefit from economies of scale, while also being non-core for some of the larger players. In Q4 we saw fund management group Gartmore call in Goldman Sachs to conduct a strategic review of its business following the departure of some key personnel, while the Royal Bank of Canada also agreed to buy the UK fixed-income money manager BlueBay Asset Management for GBP963m.

Overall, however, the transactional climate in the sector remains sticky, and a number of deals brought to the market have subsequently been withdrawn due to a lack of buyer interest. Our expectation is that that will change, and we see improvements in access to credit helping banks as much as other corporates return to the M&A market.

We are seeing more buyers from the Far East, and particularly from India and China, looking to the mature Western economies for acquisitions, so more cross-border deals are likely. The expected influx of Middle Eastern money has not materialised, however, with those sovereign wealth funds apparently content with the level of their equity investments put into the sector during the crisis.

Going the other way, investments into emerging markets still look unlikely, as U.S. and European banks continue to focus their attentions on business closer to home.

The year 2011 will be the year when the fine print of the many new regulations impacting on the banks will emerge, allowing financial institutions to make definitive calls on the shape that their businesses should take for the long term. New rules on capital requirements, compensation structures and much more will be thrashed out in the next 12 months, leading to decisions on further divestments from the big players that will drive the M&A market.

We expect transaction levels to slowly increase over the year ahead, in line with a sense across the industry of finally getting over the credit crisis, leading to the emergence of reshaped banks built for the future.