The year 2010 saw overall growth in global deal activity, and energy and natural resources transactions continued to dominate, accounting for a third of all deals.

Oil, gas, coal, minerals and other commodities were the focus of these transactions, with increasing global flows of capital among OECD and emerging states and the strengthening presence of the BRIC community. 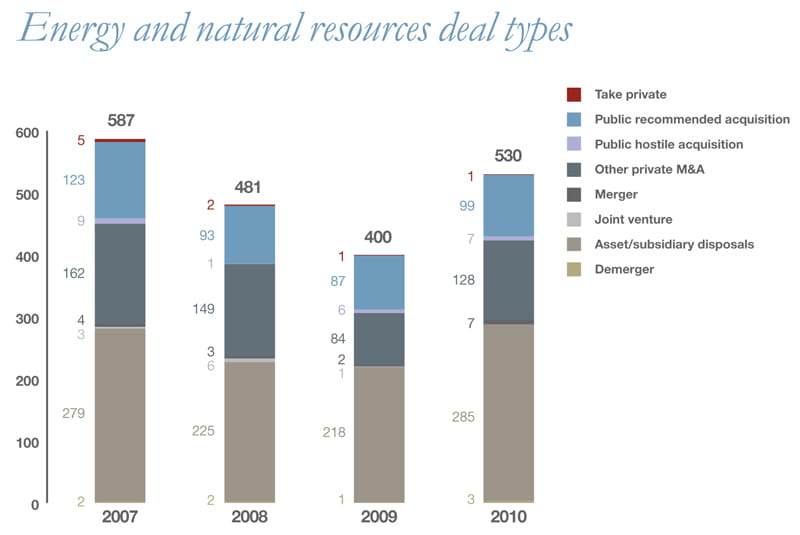 The pursuit of resource acquisition influenced deals to acquire production interests and to obtain hydrocarbons and other resources for the growing consumer markets of China and India. The year also saw moves by Russian oil and gas companies towards the Middle East (with interests in Iraq) and towards South America, with deals in Venezuela. Brazil has enjoyed such exploration success that foreign companies have moved to enhance their interests or to make new acquisitions with the challenge being the raising of funds for the extensive capital requirements to develop these resources.

Australia and Canada have also seen new entrants as international resources companies and state entities acquire interests in their unconventional oil and gas as well as more conventional minerals.

The flow of capital across continents reflects the participation of state-owned or state-influenced entities from emerging markets, as well as sovereign funds and the more traditional international energy companies. The nature of deals varies among this community with some deals being agreed at a state level with state funding and others following a more commercial path of corporate equity and bank debt, with investment protection.

The hunger of emerging consumer economies such as China and India for hydrocarbons and petroleum assets has met with the disposal programmes of assets and businesses by a number of the integrated resource companies seeking to raise funds for the extensive capital requirements of their committed developments. Examples here include CNOOC’s acquisition of a stake in Argentina’s Bridas Holdings and the purchase by Sinopec Group of deep-water oil assets in Brazil.

BP’s disposal programme during the second half of last year impacted on deal values, with the sale of assets to Apache Corporation and the disposal of its interest in Pan American Energy for USD7bn.

Elsewhere the development of unconventional gas supplies, like shale gas and coal seam gas, is driving deal activity and generating interest among the service and equipment companies that have access to the technologies and techniques required.

The energy sector has seen continuing deal flows at all levels, but we see those deals getting more complex. The community of participants is broad and diverse, geopoliticalissues remain ever-present, and commodity markets have broadly retained their volatility. The nature of political, regulatory and competition oversight in the context of many of these deals, and particularly the larger ones, often leads to extended timetables and the risk of commodity price change or political movement endangering the underlying economics of the transactions. As competition for assets and interests has risen, so has a preference for auctions and competitive disposal processes.

These trends seem to have moved some potential acquirers away from the traditional arena of agreed deals towards more hostile steps, such as BHP Billiton’s bid for Potash and, on a smaller scale, the acquisition of Dana Petroleum by Korea National Oil Corporation. These hostile deals have the potential to enhance rather than limit such uncertainties, but we nevertheless expect increasing deal complexities to remain a feature of an active and competitive energy market in 2011.