Since 2011, the Government has been on a mission to make employment tribunals more efficient and reduce the number of claims. The latest of these reforms is mandatory early conciliation, whereby the parties will be offered a confidential process to settle the dispute by the Advisory, Conciliation and Arbitration Service (Acas). For most claims, this means that there is now no direct route to the employment tribunal without going through Acas first.

EC has always been available to the parties to a dispute on a voluntary basis, so the service is not new. What differs is that it is now mandatory to contact Acas about an intention to issue an employment tribunal claim, but participation by either party in the process is entirely voluntary.

How does EC work?

A person intending to make a claim has to get in touch with Acas using an online form or by phone. The information required at this stage is simply the name and address of both the individual and the employer, but the EC notification form also asks for phone and email contact details, details of employment including start and end dates, and the date of the event on which the applicant intends to make a claim. Acas will then make reasonable attempts to contact both parties to the dispute and offer conciliation.

An EC certificate, with a unique number, is now required to commence proceedings in the employment tribunal. It is given to the party intending to bring a claim if the dispute cannot be settled in EC or either party chooses not to participate, or a party cannot be contacted to offer the service.

The time limit for issuing a claim in the employment tribunal will be paused while EC is being considered or is ongoing. If Acas makes contact with the parties and both agree to engage in EC, there will be a one-month period during which the conciliation officer will try to promote a settlement. The one-month period can be extended by up to a further 14 days, provided that both parties consent and the conciliation officer considers there is a reasonable prospect of achieving a settlement before the extended period expires.

If a settlement cannot be reached, the period of EC will end early and an EC certificate will be issued.

There is likely to be significant confusion as to the time limits and when they stop and start running as part of this new regime. Inevitably, there will be a whole host of satellite litigation in dealing with such cases.

Should employers engage in EC?

There may be many circumstances where EC is appropriate if avoiding litigation is the ultimate goal. However, this

may not always be the case.

There are a number of factors to consider: 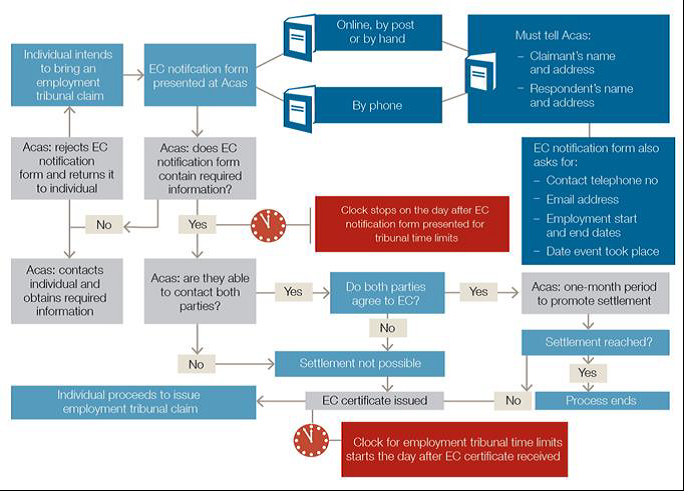 While it is too early to assess how successful the scheme will be in resolving pre-litigation disputes, the latest tribunal statistics show that other reforms, such as the introduction of two-tier tribunal fees to bring and hear claims, have already significantly reduced the number of claims.

Fewer claims means that progress through the tribunal system will be at a much quicker pace. Previously, it would have taken approximately 8-12 months to bring a case to tribunal, but that time period may drastically decrease given the significantly lower number of claims. That translates into more immediate pressure on those involved in disclosure and the preparation of witness statements etc.​