The market for initial coin offerings (ICOs) is a novel and complex phenomenon wherein projects issue blockchain-based transferable assets known as "tokens" to the public in return for payment in a crypto currency.

One of the most obvious use cases for such ICO token issuances is to represent some form of traditional security – e.g. equity, debt, participation in profit sharing. However, since the "offer and sale" of securities is highly regulated, several models have been devised by start-ups to enable ICO distribution models without falling afoul of securities regulations.

This alternative asset class – known as "appcoins" – enables holders to access a product or service at some preferential commercial arrangement (e.g. discounted price or exclusive access), and the tokens can be traded on an open market.

The U.S. Securities and Exchange Commission (SEC) recently issued an investigative report cautioning market participants that the offer and sale of digital tokens by "virtual" organizations may be subject to the requirements of federal securities laws, also noting that potential classifications of tokens as securities will be assessed on a case-by-case basis and will relate to the facts and circumstances, including the economic realities of the transaction.

Despite the SEC's stance, though, it is still not entirely clear what the boundaries are for token issuances in general, both in the U.S. and globally, as such cryptocurrencies and ICOs remain the "Wild West" of financial services, where value is being created through regulatory arbitrage.

In order to gain a better understanding of emerging appcoin markets, it is helpful to draw attention to the little-known Japanese gambling sensation pachinko.

Most forms of gambling were illegal in Japan prior to 2016. Nevertheless, over the years determined entrepreneurs found simple yet effective methods to bypass Japan's gambling laws. One of the most popular methods was utilized by parlors operating the pinball-style arcade game known as pachinko.

While almost unheard of outside of Japan, pachinko caused the emergence of a thriving gambling market within Japan with approximately 11,000 pachinko parlors nationwide generating gross revenues of USD209 billion in 2015, approximately 4–5 percent of Japan's GDP.

Players participate by purchasing small metal "pachinko balls," then load these into a pachinko machine and operate a lever mechanism that deposits the balls at the top of the machine. The balls fall through the machine, where they hit targets yielding returns in the form of more balls.

Once players decide to call it quits, they take their remaining balls (including extra balls won) to a prize booth in the parlor where they exchange these for prizes.

As the pachinko parlor is forbidden by law from awarding cash prizes, it gives a "cash equivalent prize" in return for the pachinko balls the player returns. However, the pachinko parlors have an associated, but normally separate, independent business located outside the parlor that "buys" the prizes for cash.

Pachinko parlors have built a thriving gaming (and closet gambling) industry operating subtly yet effectively in plain sight. Pachinko's market size shows there is either huge demand for this type of game, or that it is a substitute for the simple and unadulterated concept of casino style gambling.

The key question is, which is it?

Pachinko parlors have been one of the easiest ways for the Japanese market to fulfill its gambling demand by the only means it could – a contrived mechanism designed to overcome legal restrictions on casino-style gambling with cash.

The legalization of casino style gambling in Japan stemmed from the government recognizing the opportunity to tax the sizable gambling market. However, there is also a strong possibility that contrived business models, like those used by pachinko parlors, will adjust to increase their appeal in the new gambling environment.

Pachinko is an interesting example to demonstrate what may be happening in the world of ICOs, as it draws similarities with the creative explanations and models in the crypto space designed to distance ICOs and issued tokens from securities.

The construction of these "workarounds" that leverage regulatory arbitrage opportunities to execute undercover securities issuances may be limiting the vision and creativity required to see the true scale of what ICOs and digital tokens could represent; blinding the industry to possible risks.

The theory is that, if appcoins provide access to a future product or service, their value will increase as the product is launched and appcoin usage increases. Therefore, early adopters (ICO participants) benefit from the upside through capital gains of the issued appcoins.

However, there is significant complexity in understanding the boundaries where a token goes from being a "simple" appcoin to a security.

The economic reality is that people are giving money (cryptocurrency) to a counterparty to execute a project where the buyer will gain some benefit in the future, and this benefit goes beyond a simple one-off product or service. Unlike reward-based crowdfunding, such as a Kickstarter campaign, the upside for an ICO participant is not limited to receiving a single product or service.

ICO participants are essentially buying into the ongoing commercial viability and success of the issuing project or organization, and participants are likely anticipating that the value of their appcoin holdings will increase – in which case they either earn a greater financial return by selling the tokens (capital gains), or gain more credit to access the underlying product or service.

In any event, an ICO participant's expected returns may be seen as linked directly to the pooled funds of the ICO and the efforts of the issuer to use those funds to execute its proposed plans to generate returns – i.e. participants are buying into the ongoing commercial proposition.

Due to such complex economic realities of ICOs and the resulting appcoins, it becomes increasingly difficult to distinguish coins with these rights from analogous existing structures which are long established forms of securities. If analyzed correctly, how can a token issued with attendant voting rights, rights to benefits and potential involvement in management decisions be any different from an equity security?

This is the key question that needs to be answered by issuers of an appcoin.

The increasing frequency of such offerings leads to a strong possibility that in the coming years many ICOs will fall under the stringent regulatory oversight common for securities.

Many contributors to the blockchain use case debate are already advocating greater consistency in the application of existing regulations. For example, in its response to the UK Financial Conduct Authority's recent consultation on the use of "distributed ledger technology," the Association of Financial Markets in Europe (AFME) argued that "regulation should focus on the activity taking place, not the technology that delivers it."

While greater application of existing or even new regulation will increase the complexities and costs of token issuances, it is also likely to open this asset class to new categories of investors, and therefore a deeper pool of capital.

Such additional regulatory burdens will reduce the regulatory arbitrage opportunities driving current ICO growth. All other things being equal, more economically efficient financing instruments executed through ICO distribution channels may gain prominence, such as debt and equity or fund-like structures.

Therefore, greater regulatory oversight of the ICO process may elicit the true benefits of appcoin type tokens, which could accelerate the refinement of real use cases rather than just being mechanisms for bypassing regulatory burdens.

Additionally, while the industry is operating in regulatory limbo, there may be ICOs that are misclassified or legally ambiguous. These may later be determined to have violated securities laws in one or more jurisdictions.

If the impact on investors is seen as sufficiently detrimental, retrospective prosecutions cannot be ruled out.

Considering the highlighted risks, more suitable models need to be built to account for the economic complexities of issuing and managing tokens. This can be viewed in two ways: first, from the structural properties related to token issuances themselves; secondly from the overall market dynamics impacting efficiency and stability.

Structural properties can be considered in terms of monetary policy – i.e. token scarcity managed with a supply cap and controlled release; and a more novel concept of "Fiscal Policy," meaning commercial benefits for token holders, such as exclusive or discounted access.

For example, an issuer could make a fiscal policy proposal to increase the commercial benefit of the tokens, leading to an increase in aggregate demand of the tokens. This action could be combined with a monetary policy decision such as releasing tokens that may be held in escrow, thereby increasing total supply in circulation (diagram below).

The combined increase of supply in circulation and the demand due to increased commercial benefits may result in a net minimal impact on current price. 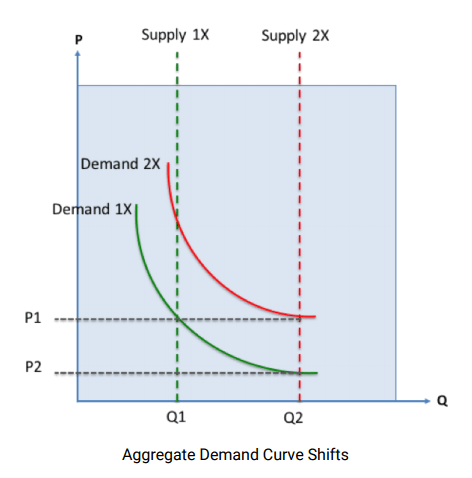 What's next for ICOs

Even with sophisticated models to understand structural and dynamic properties of tokens and the overall market, the fact is that ICOs and tokens are a new phenomenon.

Many are trying hard to believe and convince others that ICOs are just like reward-based crowdfunding or software licenses in order to distance the issued tokens from financial securities, only for the purposes of abstracting legal and regulatory burdens.

While this may result in some short-term gains, the chances are it may lead us to miss a much (much) bigger opportunity or even delay a ticking time bomb.