ESG and sustainability have emerged from something on the side to a major boardroom item.

‘Interesting’ and ‘fascinating’ are words that frequently enter a conversation with Jochem Spaans. It’s obvious he’s lost none of the enthusiasm that helped propel him to the top of his field.

A personal interest in all things ‘green’ and in the technological changes that fuel green growth played a big part in his decision to pursue a PhD in environmental law. It then led him to a practice in the Environmental, Social and Corporate Governance (ESG) field.

Interest is what lured him away from A&O for a short period, and what brought him back when he realised how much he missed the complex – and fascinating – work he could be involved with at A&O.

Today, as an Amsterdam-based Environmental and Public Law partner within the Projects and Real Estate practice, he relishes being at the epicentre of an important area of law. As he notes: “ESG and sustainability have emerged from something on the side to a major boardroom item.”

He’s still connected to his faculty at the Vrije Universiteit (VU) in Amsterdam as an assistant professor, which is a plus, says Jochem. It helps that he enjoys writing: he’s currently working on the next edition of a textbook on Dutch public law that he is co-authoring.

“Academia is intellectually an enriching opportunity,” he says, and highly valued in the Dutch profession: there’s a list in the Netherlands that ranks firms by the number of their people who are associated with universities.

No intention of practising law

Jochem initially had no intention of practising law: he was enjoying academia but felt he needed a “useful day”. He spoke to his professor, Hendrik Jan de Ru, who happened to be an A&O partner, now retired. The upshot was an invitation to join his team part-time while Jochem completed his PhD.

Part-time evolved into full-time and  he “grew into the role” in the Amsterdam office, where he’s remained except for a spell in New York with Ken Rivlin, partner and head of the U.S. Environmental team, plus a year away.

That happened in 2019 when, after 16 years with the firm, Jochem was invited by one of the oldest and most prestigious Dutch firms, NautaDutilh, to lead its Public Law team. He accepted.

Then Covid-19 struck. Working from home after only about three months physically in the office was much more difficult than he’d imagined. Especially hard was building new relationships.

“One of the things I learned in my short time there was how deeply engrained A&O is in my DNA – which is not surprising, given how long I had  been with the firm,” said Jochem.

“I missed the A&O mentality, the international work, the platform  and network. I always massively enjoy working with the A&O global Environmental Law team.

“If you want to do really complex, interesting work, you have to do it together.”

The friendships with colleagues such as Ken Rivlin – but also various Amsterdam partners, including Leon Hoppenbrouwers and Zeeger de  Jongh – were impossible to ignore. Hendrik Jan de Ru was one; another was Henry van Geen, now also retired,  a partner he worked with for most of  his professional life. “We’re different in many ways,” says Jochem. “But we share a deep interest in the law.  I learned a lot from him.”

The pandemic gave Jochem a lot of time to think before a fortuitous meeting with his old friend Werner Runge tipped the scales. When restrictions lifted, Werner, a former partner and now of counsel in the Amsterdam office, dropped by for a cup of coffee and ended up staying for more than three hours of intense conversation.

“We talked about how as lawyers we can contribute to sustainability – not just in environmental work but in financing work, which is his specialisation, and other practice areas and jurisdictions.

“I realised I missed doing this.  And I knew Werner felt the same.

“I’d learned and grown a lot in that period at NautaDutilh,” he said. “I needed time away to realise how deeply the DNA of A&O is ingrained in me.”

One of the things I learned in my short time there was how deeply engrained A&O is in my DNA... I missed the A&O mentality, the international work, the platform and network.

Sustainability moved up the agenda

Despite being away for less than two years, Jochem saw a sea change on his return to A&O: ESG and sustainability had emerged from something on the side to a major boardroom issue.  “I feel I’m in a sweet spot because of  my professional expertise. These issues are now on everyone’s agenda.

“We’ve seen in the Netherlands and globally a clear development in ESG  that obviously helps.”

He points to the landmark 2019 Urgenda Climate Case – a global first – in which citizens established that their government had a legal duty to prevent dangerous climate change. The Supreme Court ordered the Dutch government to take urgent and significant action to cut emissions.

Further developments in the corporate world suggest citizen action is building momentum, which Jochem finds fascinating from a legal and societal perspective. He notes in particular the 2021 case involving Royal Dutch Shell, which revolves around compliance  with an unwritten duty of care.

“Legally, it’s super-fascinating,” he says. “Although Shell complies with the environmental laws where it operates in this respect, the court says it’s not enough to prevent dangerous climate change. “It sparks a whole set of questions:  if complying with the law is not  enough, what is?”

Jochem recognises other jurisdictions may look at matters differently, and that such a “bold ruling” should be tested at a higher level. Nonetheless, it is a “far-reaching” decision that reinforces his decision to re-join A&O.

In the Netherlands, he says, lawyers working in environmental law “know each other professionally and often as friends. We’re both a relatively small country and a relatively small group  who practice in this field, at this level.

“I know how strong our international Environmental Law group is,” he says. “With Ken in New York, Matt [Townsend] in London, Gauthier [van Thuyne] in Brussels, Romaric [Lazerges] in Paris, Udo [Olgemoeller] in Frankfurt, Goran [Galic] in Perth and so many others –  I could really go on – we have a well-connected network with excellent lawyers around the globe.”

That network and reach becomes significant as corporations increasingly accept that emissions and climate change are cross-border problems, connected globally just as supply  chains are.

It gets interesting legally, Jochem says, when legislators adopt supply chain remedies to tackle societal problems such as fair salaries for workers in primary industries. The impact of regulations applied to companies in  one jurisdiction reaches far beyond  its borders.

“That explains why that type of legislation is popular and makes what I’m doing interesting on an international platform,” he says.

Environmental law is not for everyone, although in his view it is “one of the most fascinating areas of practice”. The work itself is legally technical and requires a grasp of detail to understand the many complex laws governing  the field.

Jochem has found himself advising companies in industries such as chemicals and electronics on “what’s allowed and what’s not”, as he puts it. He enjoys the technical dimensions  of the work.

“To advise your client about the rules covering the type of combustion plant they want to build, you must understand exactly what they’re doing, what fuels they plan to use, what will be released. Any related litigation is hugely detailed and complex.

“You shouldn’t be doing this if you don’t like the nitty-gritty of in-depth analysis.”

Convinced it was right

Jochem has his parents to thank for his lifelong interest in the environment: they taught him an appreciation of his natural surroundings and sustainability by example. “We travelled everywhere on public transport,” he recalls.

Passing a similar approach on to his son and daughter, who are five and ten respectively, is challenging, but they do live in an “almost carbon neutral” house Jochem and his wife had built. It’s thermally heated via a 200m-deep borehole, and packed with other technological, sustainable features.

He says if he’s learned anything in his career to date, it’s how blessed one  is to be able to do work that is – that word again – interesting. Every day  is different.

“Career and life are all about networking, the longevity of your relationships, their intellectual and geographic spread and so on.

“I’m sure I’ll be learning new things the rest of my career. You’re fortunate if you can dedicate yourself to something that allows this kind of lifelong learning.”

The transition to a sustainable economy: why it is relevant to everyone 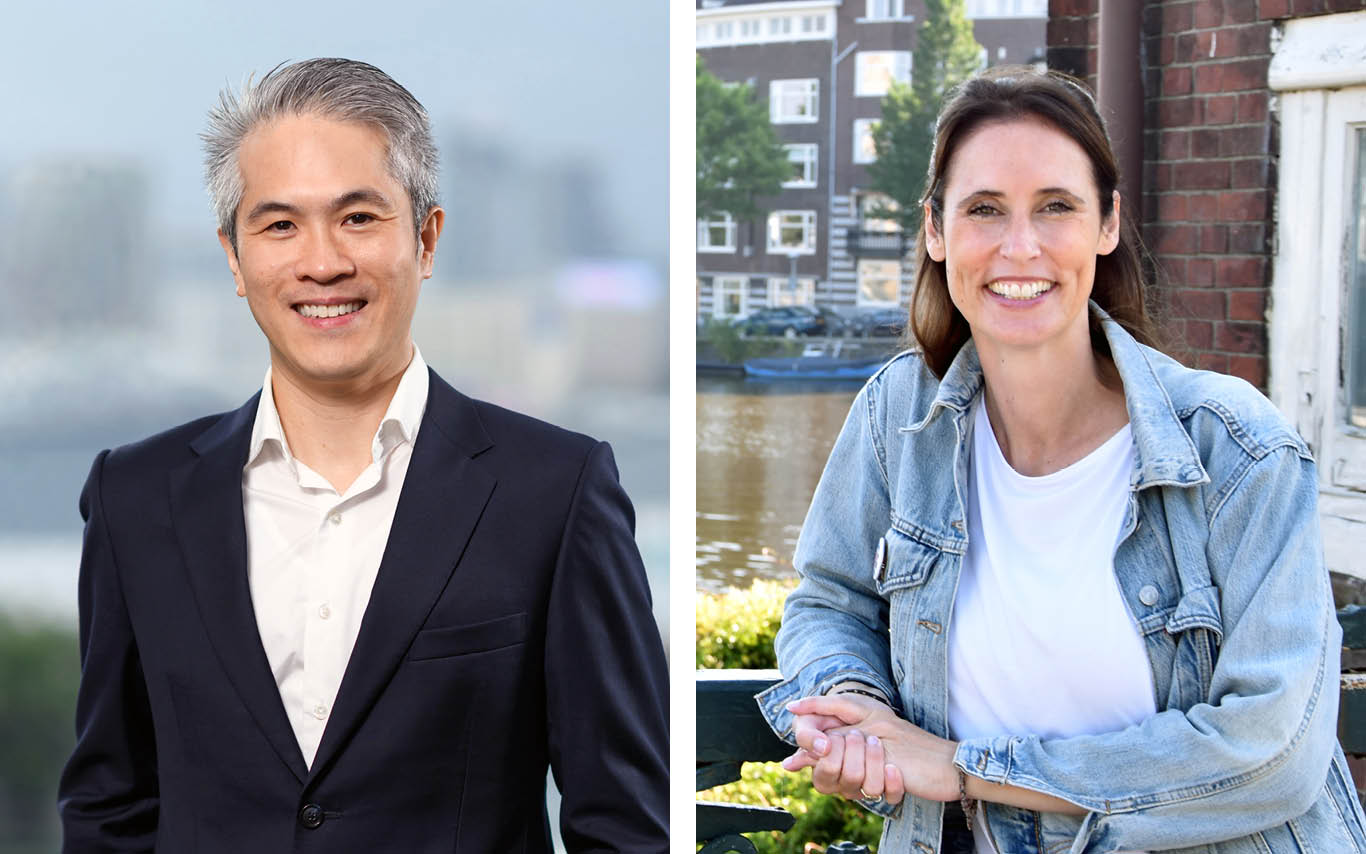