Trustees and managers of occupational pension schemes (and trust-based stakeholder schemes) are legally required to provide an internal dispute resolution procedure, or IDRP.1 This is intended to ensure that members of pension schemes are able to raise complaints about the scheme with the trustees responsible for that scheme.

A scheme’s IDRP must provide a process for resolving disputes about the scheme which arise between the trustees or managers and:

Key steps in an IDRP process 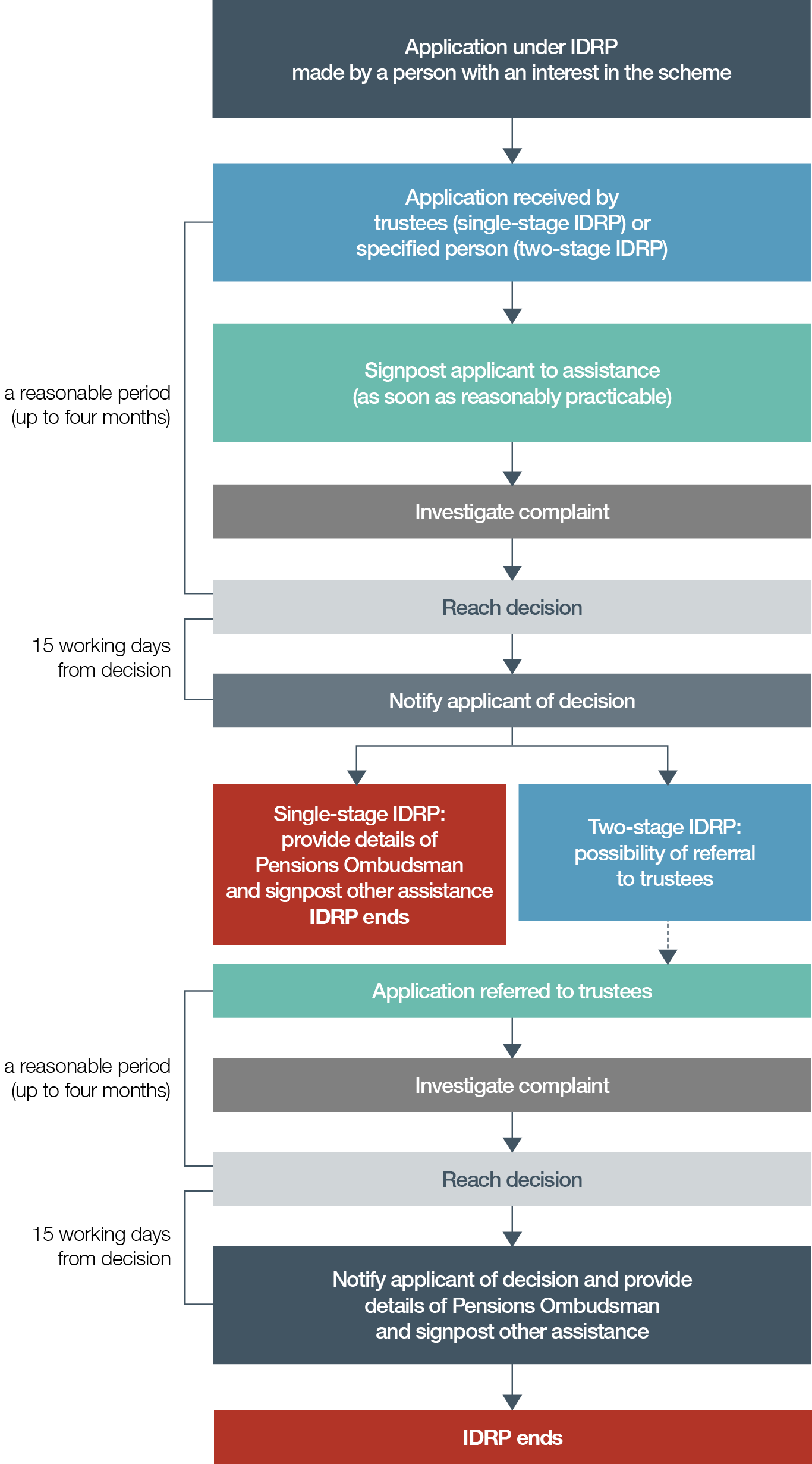 Although the law requires trustees and managers to provide an IDRP for the above types of disputes, schemes have a lot of flexibility in designing their own process. Legally, an IDRP must set out certain time limits, but schemes are free to decide what these are (provided that they are reasonable) – the Pensions Regulator expects that a decision will be made within four months of receipt of a complaint, but a particular scheme may choose
a shorter period. In any event, decisions should be taken as soon as possible, rather than waiting until the final deadline.

Many schemes operate a two-stage process, with the stage 1 decision being taken by the pensions manager (or equivalent). In this case, stage 2 is effectively an appeal and the stage 2 decision is taken by the trustees themselves. Some schemes prefer a more streamlined, one-stage procedure in which all complaints are considered by the trustees (though this function may be delegated to a committee rather than the full board).

Trustees should note that legislation provides that, as soon as reasonably practicable after receiving an IDRP complaint, they must inform the complainant about resources that are available to assist them, and provide contact details for these (see below).

The decisions should summarise the complaint, give a clear decision as to whether the complaint has been upheld or dismissed, and set out enough information about the reasons why that decision was taken to allow the complainant to decide whether to challenge it.

In the final IDRP decision, the trustees must provide the contact details for TPO.

Money and Pensions Service and TPO

The Money and Pensions Service has taken over the functions of The Pensions Advisory Service (though the service is still being provided under the TPAS brand). It provides general information and guidance about pensions and schemes are required to signpost this service. Dispute resolution services previously provided by TPAS are now delivered via TPO’s Early Resolution Service (ERS) and schemes may also choose to signpost this. The ERS may help members with complaints to schemes and the IDRP process, as well as hearing complaints without the IDRP process being completed if the parties agree to this. TPO does not investigate every complaint made, and may reject complaints at the initial stage. For more information on TPO investigations, visit www.allenovery.com/TPO.