How the Pensions Ombudsman awards compensation for distress and inconvenience

Pension schemes are complex and even the best-run schemes have to deal with complaints. The Pensions Ombudsman (TPO) has the power to make financial awards for ‘non-financial injustice’ in relation to member complaints. In September 2018, TPO published revised guidance on this type of compensation – we consider how TPO’s guidance has been applied in recent decisions, and how this can assist trustees when considering whether to offer such compensation in response to a complaint.

TPO has the power to make financial awards for ‘non-financial injustice’ in relation to member complaints – meaning in respect of any ‘distress and inconvenience’ caused by the maladministration. Historically, these awards have generally been in the amount of a few hundred pounds, with awards of over GBP1,000 being rare. However, in September 2018, TPO published revised guidance setting out its views on the appropriate levels of this type of compensation, and revaluing the scale of awards to take account of inflation. This guidance was informed by two 2017 High Court decisions which called into question the previous basis on which distress and inconvenience awards were made.

In a 1999 case (City and County of Swansea v Johnson), the judge said that an award for distress and inconvenience of over GBP1,000 should only be given in exceptional circumstances. However, by 2017, the High Court decision of Baugniet v Capita Employee Benefits Ltd suggested that the upper limit of GBP1,000 was now ‘out of touch with the value of money’ and considered an increase from GBP1,000 to GBP1,600 as being broadly in line with inflation.

This was reinforced by Smith v Sheffield Teaching Hospitals NHS Foundation Trust, where the High Court allowed an appeal against an award of GBP500 by the Deputy Pensions Ombudsman (DPO), finding that the amount awarded was so low in the circumstances that it must represent an error of fact and/or of principle. The court held that the award should be above the top end of the normal band (which it considered to be GBP1,600) due to the repeated instances of maladministration over an extended period of time, which could have been easily corrected. The amount of compensation was therefore increased to GBP2,750.

Following on from these cases, TPO’s revised guidance has introduced ‘fixed’ awards for compensation for distress and inconvenience caused by maladministration. TPO’s aim is to enhance transparency, create consistency and manage expectations for all parties to the complaint.

How much might TPO award according to the current guidance? 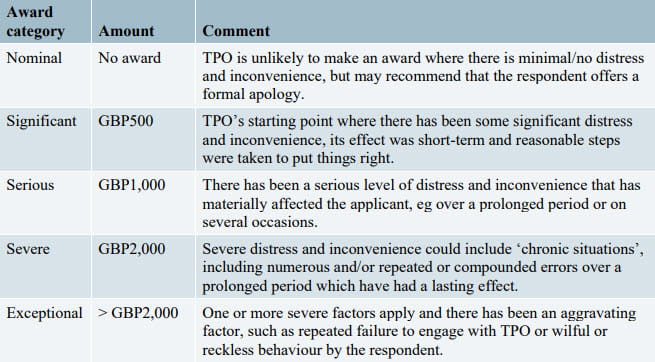 What amounts are typically awarded in light of the guidance?

The guidance reiterates that not all maladministration inevitably leads to an award for distress and inconvenience. Where the distress and inconvenience is nominal, it is unlikely that any award will be made. A recent example of such a case was Mr E (PO-19948), where the DPO did not find that the matter warranted the minimum £500 award. In short, an apology can still be appropriate redress for non-financial injustice.

Since the current guidance was issued, TPO has made awards of up to GBP9,000 (in the relevant case, GBP6,000 was payable by the trustee and GBP3,000 by the administrator). The usual awards are still GBP500 or GBP1,000. GBP500 is TPO’s starting point where there has been significant distress and inconvenience but there have been more GBP1,000 (serious) awards since the latest guidance was issued, which is to be expected in light of the fixed bandings.

In Mrs P (PO‑13962), the DPO partly upheld a complaint where a member was provided with incorrect early retirement estimates, which she said she had relied on when deciding to retire, as well as other financial decisions. The DPO did not uphold the main part of the complaint, but did conclude that Mrs P had been given misinformation which could have been corrected at an earlier date, which was maladministration. The GBP2,000 award in this case seems high given that the main claim failed. It appears significant that the member had taken reasonable steps to question the accuracy of the estimates (including querying the (incorrect) average salary figure used).

In Mrs H (PO-18947), TPO awarded GBP2,500 despite finding that incorrect information provided to the member did not cause financial loss. TPO compartmentalised the award:

These delays meant that Mrs H only became aware of the correct position at a relatively late stage.

Complaints falling into the exceptional category, where more than GBP2,000 would be awarded, are less common, but there have still been a number of these. An example of such a case is Mr L (PO-18253), concerning a failure to respond to a member’s enquiries about the scheme, leaving the member unable to access his benefits. The Adjudicator considered that the member should be awarded GBP1,000, but TPO increased this to GBP3,000. This might sound high but was consistent with TPO’s previous practice in exceptional cases. Recently, TPO directed a trustee to pay members £6,000 in a case where TPO found multiple breaches of duty and pensions legislation (as well as related maladministration).

How does TPO decide which award category is applicable?

If TPO considers that a monetary award is appropriate, TPO will decide the correct level according to a list of factors set out in the guidance (examples of which are given in the ‘comment’ column of the table above).

It is not always easy to determine from the guidance which category a case falls into. The descriptions of the categories sometimes overlap and no points of distinction are specifically drawn between the categories. In some respects this is helpful – where a case does not fit neatly into one category, trustees may take a holistic view of whether the higher or lower category would be more appropriate.

The scope for interpretation between the categories is illustrated by the fact that there have been a number of cases since the latest guidance was issued where the Adjudicator and TPO have disagreed about the amount to award. For example, in the case of Mr L (PO-24017) (concerning delays in dealing with an application for an ill health pension) the Adjudicator felt that an award of GBP500 was appropriate but TPO thought this was insufficient and increased the award to GBP1,000. See also the case of Mr N (PO-20002), where the Adjudicator considered that the maladministration (in connection with incorrect information about unreduced early retirement) had caused a serious loss of expectation and GBP1,000 should be payable (in accordance with current guidance). However, TPO considered that GBP500 was appropriate. See also the case of Mr L (PO-18253), mentioned above, where TPO increased the Adjudicator’s award from GBP1,000 to GBP3,000.


Take away points for trustees