What to do if the Pensions Regulator asks for information

The Pensions Regulator (TPR) has a number of legal powers to gather information, but more commonly asks for information informally from trustees, employers and administrators. Against the backdrop of TPR’s ‘clearer, quicker, tougher’ approach and plans to grant TPR new legal information-gathering powers (and sanctions), what are the key points to consider if you receive a request for information?

What are TPR’s information gathering powers?

TPR already has significant legal powers to demand information, but tends to use these infrequently (and most commonly in the context of enforcing auto-enrolment duties). TPR may also ask for follow-up information from trustees or employers as a result of various formal and informal mechanisms, including:

You can read more about reporting requirements in our briefing When to approach the Pensions Regulator.

The table at the bottom of this page gives an overview of TPR’s current powers, together with key proposed changes (and penalties) under the Pension Schemes Bill.

Not all information requests are the same, but there are some general principles to follow if you receive a request, as well as practical tips in connection with informal requests, section 72 notices, and interviews.

In one case, trustees received a questionnaire from TPR as part of its ‘fair treatment’ regulatory initiative due to TPR’s concern that the sponsoring employer was paying out disproportionately high dividends at the expense of deficit repair contributions. TPR reported that the subsequent regulatory engagement led to an additional GBP15m lump sum being paid into the scheme (front-end loading the recovery plan).

In another case, the trigger for TPR engagement was some routine questions about valuation processes. When the trustees could not answer these, TPR raised governance concerns via a questionnaire. Based on the trustees’ responses, TPR opened an investigation, informed the trustees what its concerns were (including conflicts issues and a lack of trustee knowledge and understanding) and set out its expectations for improvement. In this case the trustees voluntarily agreed to an improvement plan, so TPR’s enforcement powers were not exercised. 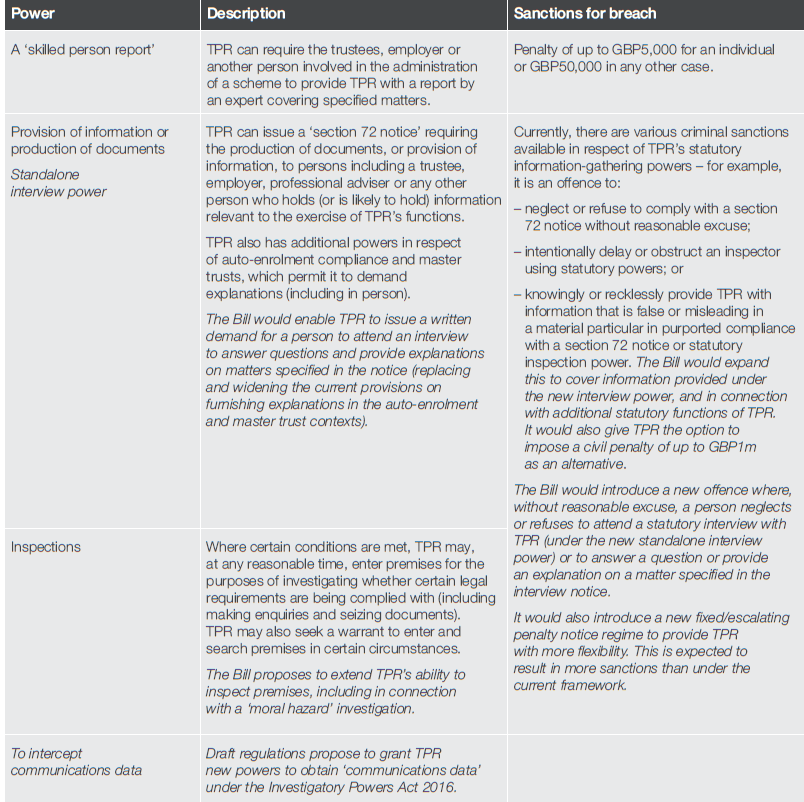 This table is not a comprehensive summary of TPR’s existing powers/sanctions or the proposed changes. Some of TPR’s powers are exercised by the Determinations Panel – you can read more in our guide The Pensions Regulator’s powers and how they are exercised.

1. This publication reflects the drafting of the Bill at Report stage in the House of Lords.