The Pensions Regulator’s powers and how they are exercised

The Pensions Regulator has far-reaching powers to intervene in matters relating to pension schemes, including the power to order corporates or individuals to make payments to a scheme. Unsurprisingly, given the significance of those powers for the parties concerned, there are strict procedures for the exercise of those powers, and the resulting decisions may well be subject to challenge.

Many of the Pensions Regulator’s powers are not exercisable by the Regulator but by the Determinations Panel (the Panel) – these are known as ‘reserved regulatory powers’, and include the power to issue Financial Support Directions (FSDs) and Contribution Notices (CNs). Click here to read about proposed changes to the Regulator’s powers.

In short, the process is that the Regulator will investigate whether there are grounds for exercising the reserved regulatory powers and will then put the case for the exercise of those powers to the Panel for a decision.

The bulk of the Regulator's powers are exercisable by the Panel, including:

The process from the Regulator to the Panel and beyond 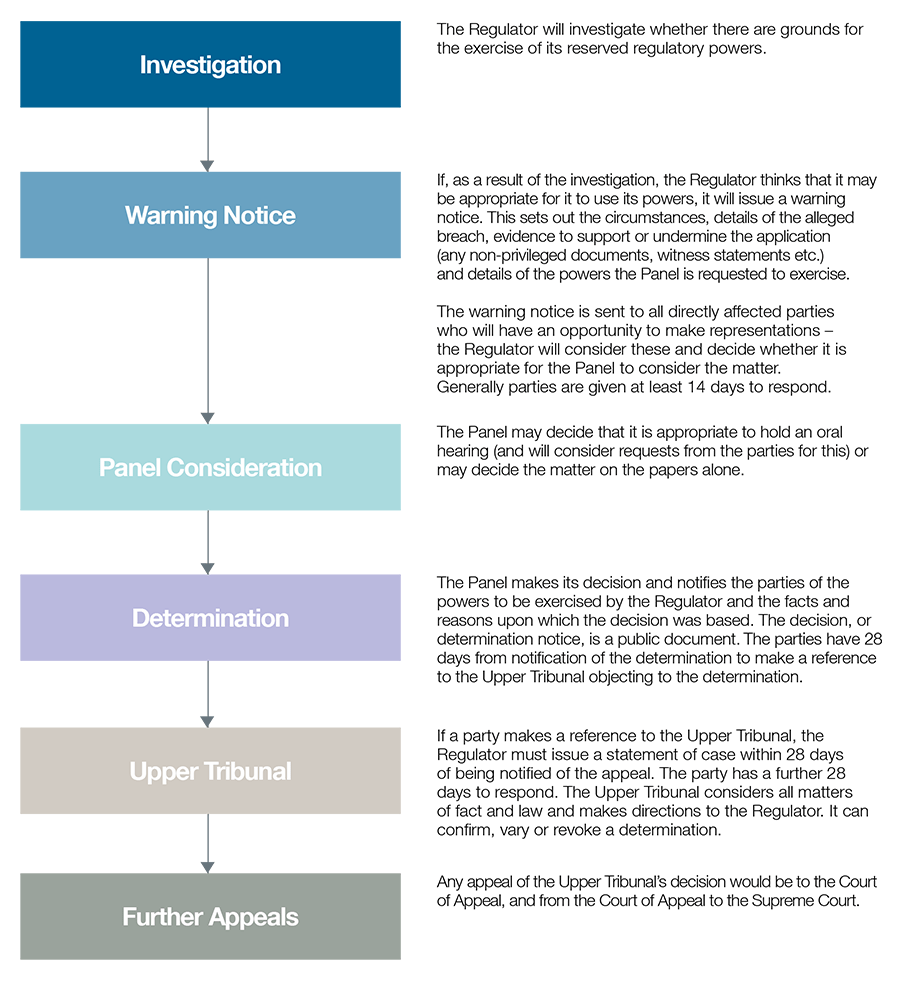 Once a case reaches the Panel, it will first consider the case by reference to all the relevant documents and findings of the Case Team. In particular, the Panel will carefully consider the Warning Notice and any representations made by the DAPs in respect of the Warning Notice. It will then set an appropriate timetable and will indicate whether any oral or public hearings will be required.

Some cases may warrant more immediate action and in such cases some of the ordinary procedural steps (such as issuing a Warning Notice) may be bypassed – this is known as the special procedure. The special procedure is used where the Regulator considers that there would be an immediate risk to the interests of members under an occupational or personal pension scheme or to the assets of that scheme if its regulatory function were not exercised immediately.

An important feature of the special procedure is the compulsory review that follows any determination made under this procedure. The review takes place as soon as reasonably practicable and is conducted by the Panel. Parties are given an opportunity to make representations. The Panel may confirm the determination or substitute it with a new one.

When the Panel has made a decision, it will issue either a Determination Notice or Final Notice (in the case of a compulsory review), and any appropriate orders. All determinations are published in full on the Regulator’s website. In addition to the reasons for the Panel’s decision, these Notices will contain information about the DAP’s right to appeal the determination (which is called a ‘reference’) to the Tax and Chancery Chamber of the Upper Tribunal within 28 days. During these 28 days the Regulator must not take any action.

In cases where there is no full determination but the Regulator has taken steps to ensure a positive outcome for the scheme (eg where a settlement is reached before the Panel considers the matter), the Regulator may publish a s89 report which will summarise the Regulator’s involvement in the particular case.

The Upper Tribunal is independent of the Regulator. It will consider the case afresh and may confirm, vary, revoke or substitute the determination. Upper Tribunal hearings are normally held in public. It is possible to appeal the Upper Tribunal’s decision to the Court of Appeal and then possibly the Supreme Court. Once all appeal rights are exhausted, the Regulator will comply with the decision of the relevant tribunal/court.

The Upper Tribunal’s review is limited to the regulatory actions specified in the Warning Notice. However, the Upper Tribunal may permit the presentation of new grounds for taking the specified regulatory actions. There is no definitive test for when this discretion will be exercised, but factors mentioned by the Court of Appeal include: the reasons for not previously presenting the new case; whether allowing it would prejudice the other side; the conduct of the parties so far (eg delay); and the nature of the new allegations (eg heightened expectations of clear pleading and appropriate detail for cases involving fraud or bad faith).

As the Regulator is a public body, it may be possible to judicially review its decisions in the Administrative Court, but any such review will be limited (as for all cases of judicial review) to certain grounds such as illegality and the general principle that there must be no other appropriate routes for relief. However, a recent case indicates that the parties will need to follow the statutory process (Determinations Panel with a right of appeal to the Tribunal) rather than just bringing a judicial review claim, unless exceptional circumstances exist.