Antitrust authorities get tough in the face of political pressure

Even before the Covid-19 coronavirus pandemic spread across the world, we were seeing a slowing of M&A activity and dealmakers searching for new ways to cope with greater regulatory complexity and economic uncertainty. Although A&O research into global merger control enforcement trends covers 2019 and pre-dates the current crisis, many of the findings still shine a revealing light on the underlying state of the M&A market before the pandemic struck, and may still hint at issues that will become pertinent once more when the crisis eases.

2019 was a febrile year in the world of merger control enforcement, with regulators across the world facing an intense debate over future policy, allegations of being too lax in their rulings and growing attempts by politicians to influence merger reviews.

However, far from being cowed by these developments, regulators responded robustly, stepping up their activity in key markets, as Allen & Overy’s 2019 report on global trends in merger control enforcement clearly shows.

Our survey – covering 26 jurisdictions, but with a particular focus on the EU, U.S., and China – reveals that antitrust authorities frustrated a total of 40 mergers during the year, an increase of 38% over 2018. Of these deals, 20 were prohibited on competition grounds, while a similar number was abandoned as a result of antitrust concerns. On top of that, authorities demanded remedies before clearing a further 143 mergers.

Antitrust authorities frustrated a total of 40 mergers during the year, an increase of 38% over 2018.

The latest survey covers a year in which we saw a slight decline in global M&A markets. Despite this, deal activity remained relatively buoyant, with the total market seeing more than USD3 trillion of transactions for the sixth year in a row and remaining close to historic highs.

Small and medium-sized deals slowed most, but, by contrast, we saw strong growth in megadeals, with over 40 deals worth more than USD10bn. With trade tensions between the U.S. and China creating an uncertain global environment, cross-border deals were also in decline. Instead, dealmakers turned to home markets for opportunities, with the ten biggest deals of 2019 all being domestic transactions.

All this activity left antitrust regulators with plenty to get their teeth into and that is precisely what they did, although to differing degrees.

We saw enforcement activity rise in many major jurisdictions during the year, but the UK’s Competition and Markets Authority led the charge, frustrating eight deals and sending significantly more transactions to an in-depth (Phase 2) investigation.

The most notable deal blocked by the CMA was the proposed tie-up between the supermarket giants, Sainsbury and Asda. But, the CMA also took the unusual step of intervening in two completed deals – the Tobii/Smartbox and the Ecolab/Holchem mergers – effectively unscrambling these transactions.

Five other deals were abandoned, including one that had already been cleared by U.S. antitrust regulators, while the number of deals referred for in-depth investigation rose by 50% and fines for breaches of procedure also rocketed up.

Planning for a post-Brexit world was also high on the CMA’s agenda for 2019, with the authority keen to demonstrate the sort of regulator it will be after the transition period ends. Until then, it remains unable to look at deals already being investigated by the European Commission. Post-implementation, however, it will be able to run parallel probes, giving dealmakers another set of filings and another layer of complexity to deal with. The CMA has itself forecast that its mergers caseload will increase by 50% after Brexit is fully completed.

At EU-level, enforcement activity also remained fierce, with the EC chalking up its highest number of prohibitions in any one year since the EU Merger Regulation was adopted in 2004. Certain national agencies were particularly active, notably Germany’s Federal Cartel Office, which blocked the highest number of deals since 2012.

The most controversial of the EC cases was the decision to block the proposed train-making merger between Siemens and Alstom, which resulted in politicians in France and Germany calling for reform of the EU merger control rules to allow for the creation of “European Champions” to compete with Chinese rivals.

Despite facing such pressures, Margrethe Vestager became the first competition commissioner to be re-appointed for a second term, which she takes on together with a wider mandate to oversee the digital sector.

U.S. and China buck the trend

Our survey reveals higher levels of intervention in a number of other jurisdictions, notably Australia and South Africa. On the other hand, the U.S. and China both, to some extent, bucked the trend.

For instance, China saw no prohibitions or abandoned deals in 2019, despite the perceived difficulties of navigating its merger control regime. The new antitrust agency, SAMR, set up in 2018, has now bedded down but, notwithstanding the trade tensions with the U.S., there was no obvious increase in intervention, according to our survey.

In the U.S. we saw one deal prohibited and five abandoned, the same number as in 2018. However, 2019 was not lacking key developments. The Department of Justice started the year recovering from a landmark court defeat over its challenge to the AT&T/Time-Warner merger. Another important TMT deal, the T Mobile/Sprint tie-up, received DOJ clearance after remedies were agreed, but was then challenged by a group of State Attorney Generals, mirroring similar action in other areas of antitrust law. While the AGs were ultimately unsuccessful, the case is a clear warning to dealmakers that clearance by antitrust authorities may not now always be the end of the story.

A number of rule reforms may be on the way as regulators grapple with how to respond to growing calls for change.

One notable area where changes in policy are being demanded is in the digital sector, where many want to see much tougher enforcement. Ideas being mooted in this sector, and more broadly, include calls for:

At the same time, regulators continue to hone their own responses, with the CMA in the UK once again notable in starting to adapt its analytical techniques, particularly for deals in fast-moving markets.

regulators grapple with how to respond to growing calls for change.

The Siemens/Alstom case reflects the clear increase in attempts by certain politicians to influence merger review outcomes. In fact, the EC held firm in this case, continuing to advocate strongly that merger control authorities should be free from political interference.

That is not the case in the U.S., where politics can play a bigger role. In 2019 the FTC was split along party lines in a number of key decisions.

One growing area of political involvement is on deals deemed a threat to the public interest or national security.

We have seen public interest considerations being used to override merger control prohibitions in the Netherlands and Germany. Meanwhile foreign investment controls have been in focus, with the introduction of an EU-wide screening process, strengthened rules in France and proposals for reform in the UK. The Committee on Foreign Investment in the U.S. (CFIUS) has been increasingly active and has obtained expanded powers, while in China – although there has been an introduction of more liberal rules to attract foreign investment – scrutiny of national security issues is still intense.

Nearly EUR145m of fines were imposed in 40 cases in the jurisdictions we surveyed.

Despite this shifting landscape, the focus in 2019 was, of course, on rules as they stand today. Antitrust authorities continued to take a tough line on procedural issues such as “gun-jumping” and failing to provide correct information. In the jurisdictions we surveyed, nearly EUR145m of fines were imposed in 40 cases. The EU, U.S. and China were all active in this area, but again it was the UK that stood out, imposing twice as many fines last year as in 2018.

Telecoms, media and tech deals were increasingly in the frame, compared to their share of global M&A, with manufacturing and industrials, life science, and transport and infrastructure transactions also a big focus for antitrust intervention.

Where remedies were concerned, there was a small increase in cases during the year. Of the 143 remedy cases we saw, 42 were agreed in phase 1, while 65 came after in-depth reviews.

We continue to see a decline in the use of “upfront buyer” remedies in most jurisdictions other than the UK, which is in line with the CMA’s increasingly interventionist approach. By contrast, the use of behavioural remedies – where parties agree to modify future market practice – are gaining ground on structural remedies of the sort traditionally favoured in Europe and the U.S.

Overall, our survey shows that 2019 was a rigorous year for merger enforcement and policy debate.

While the first quarter of 2020 showed no signs of let up, we are now in more uncertain times, with the Covid-19 coronavirus crisis likely to impact antitrust authorities’ caseload and their ability to efficiently review transactions. We will track the situation closely as it constantly evolves.

To receive a full copy of our report on merger control enforcement trends, please ask your usual A&O contact.

During the global Covid-19 coronavirus pandemic, merging parties should be prepared for delays in obtaining merger control approvals for deals. First, we are seeing a number of antitrust authorities asking parties to delay making merger notifications, especially where they are non-urgent (e.g. the European Commission, and authorities in Belgium, France, Hungary and Ireland). Second, given challenges in conducting and completing the necessary inquiries with merger parties and other market participants, merger review deadlines are being suspended (e.g. Argentina, Italy and Spain) and are likely to be extended. In the U.S., for example, the practice of granting early clearances from waiting periods has been discontinued and the DOJ is asking companies to add 30 days to timing agreements. In addition, many authorities are only accepting electronic filings (e.g. the U.S. authorities have set up a temporary e-filing system). In addition, with staff working from home, teleconferences and videoconferences are replacing face-to-face meetings and hearings. We expect to see more announcements from authorities across the globe in the coming days/weeks. While all this means uncertainty for deal timetables, we do not expect the authorities to show more lenient treatment towards mergers raising anti-competitive issues. 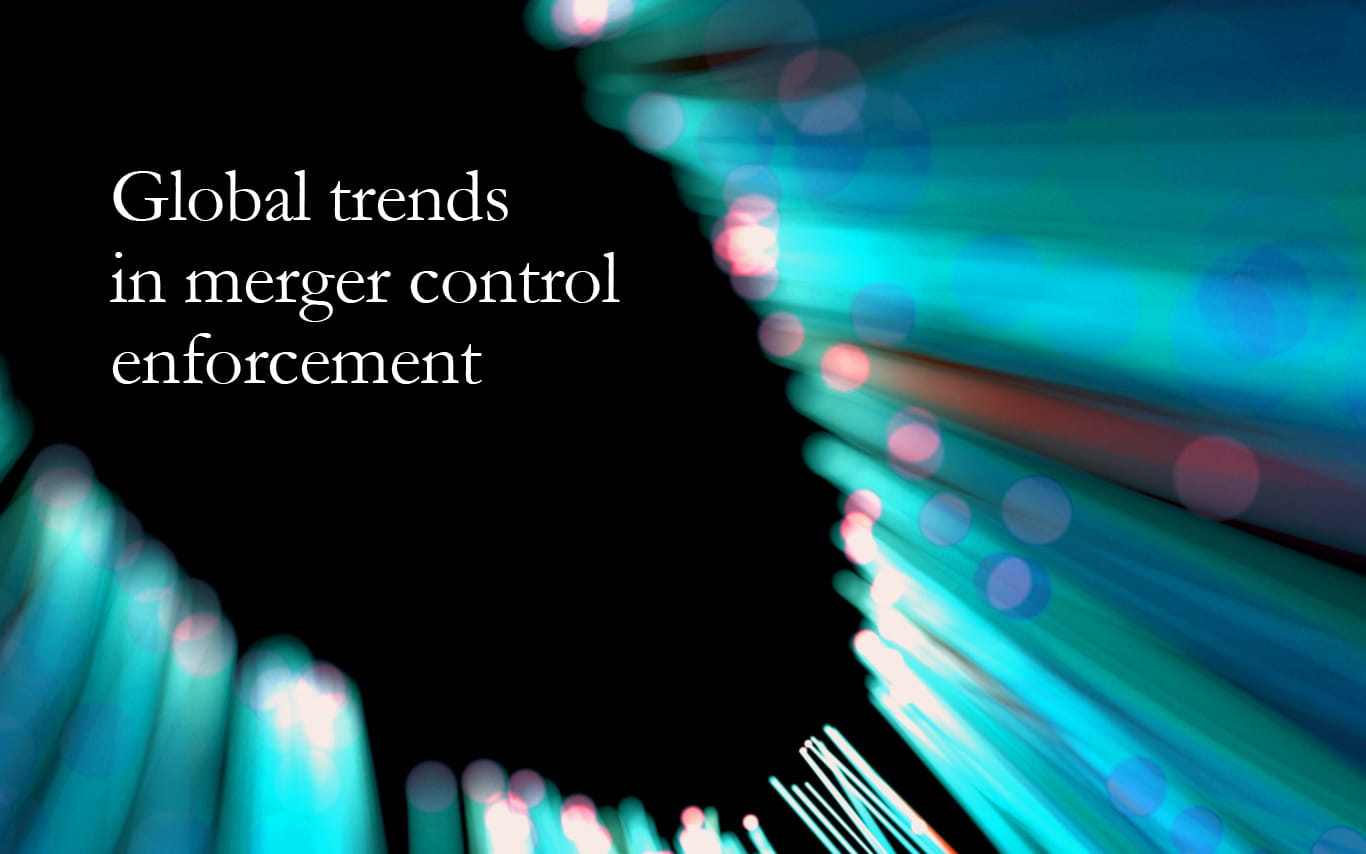