New strategies for a cooling market

Even before the Covid-19 coronavirus pandemic spread across the world, we were seeing a slowing of M&A activity and dealmakers searching for new ways to cope with greater regulatory complexity and economic uncertainty. Although A&O research into trends in the private M&A market covers 2019 and pre-dates the current crisis, many of the findings still shine a revealing light on the underlying state of the M&A market before the pandemic struck, and may still hint at issues that will become pertinent once more when the crisis eases.

Our 2019 survey of the private M&A market revealed growing caution among investors as they navigated greater regulatory complexity and economic uncertainty, waiting to see what would happen next in a slowing market.

While global M&A markets and cross-border M&A activity began to slow in 2019, it was still the third strongest year in terms of volume and the fourth in transaction volume in the last decade, with a growth in big strategic deals and a resurgence of domestic activity indicating that investors remained eager to do deals even in decidedly more uncertain times.

Yet, as our latest survey of global trends in private M&A clearly shows, there was evidence of growing caution among dealmakers as the market started to cool.

The survey, now in its eighth year, provides in-depth analysis of some 1,250 private M&A transactions we have advised on across the world and offers a unique insight into the strategies investors were pursuing as the market changed gear.

In 2019, a shift in tactics was evident in a number of clear themes. We saw a fall in auction activity, for instance, with fewer processes remaining highly competitive throughout. PE funds seemed to become noticeably more wary, in expectation of a correction in the market bringing buyer and seller price expectations closer into line.

Increased regulation was extending the time taken to close deals and, along with economic uncertainty, had an impact on negotiating tactics. We also saw a shift in dynamics on M&A deal terms, with buyers starting to reclaim some of the ground they had lost in recent years.

Between 2016 and 2018 the proportion of our deals conducted as auctions rose from 40% to 53%, demonstrating sellers’ increasing confidence that they could attract strong interest in their assets from multiple potential buyers. Last year, that went into reverse, with auctions accounting for just 46% of our deals.

More significantly, perhaps, since 2016 there has been a steady year-on-year decline in the proportion of auctions that remained highly competitive right up until the final stage. In 2016, 65% of our processes remained competitive throughout. By 2019, that figure had fallen to just 45%, mostly, we think, as a result of a mismatch in price expectations. 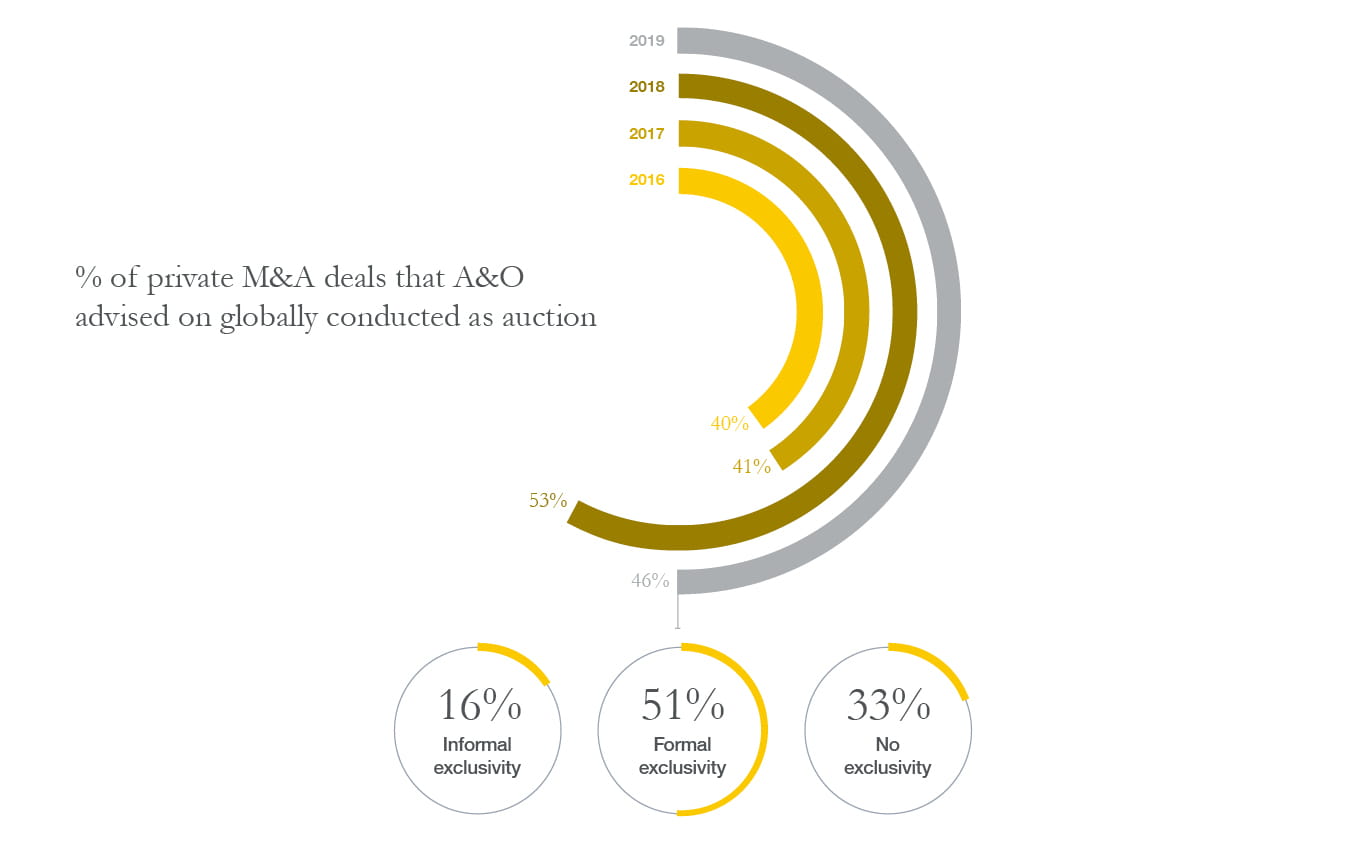 Indeed, a standout feature of the market last year was the number of auctions that either turned into bilateral deals after the first or second rounds due to lack of interest, or stalled completely because sellers could not find bidders willing to pay the increasing multiples they demanded.

When sellers did find a bidder willing to pay, they were often quick to lock in the deal as soon as possible, offering a short period of exclusivity in which to get it over the line. In fact, in 2019, formal or informal exclusivity was granted in two thirds of our auctions – a surprisingly high figure, especially in comparison to prior years.

The most competitive auction processes often involved “hot” assets – including data-rich businesses, digital and green technologies, and health products. We also saw big regional differences, with the most competition for U.S., Asian and, to a lesser extent, UK assets.

Price was not always the sole deciding factor. Deal certainty remained important across the board, and some founder sellers put great store on finding the best owner for their business – including those that could make a firm commitment to the workforce.

In each of the last three years, increased regulation has featured as the biggest obstacle to closing private M&A deals and it topped the list again in 2019, cited as a significant issue in nearly half our deals.

In each of the last three years increased regulation has featured as the biggest obstacle to closing private M&A deals and it topped the list again in 2019, cited as a significant issue in nearly half our deals.

Often the difficulties lie in managing merger control or foreign investment approval processes, and we saw activity by regulators and governments accelerate in both these areas last year. We discuss this in greater detail in our article on merger control in this edition.

Foreign investment controls, particularly in developed markets, have been steadily increasing in recent times, and last year 12% of our deals were subject to approval on these grounds.

With antitrust concerns also rising, it is not surprising to see sellers trying to push execution risk onto buyers, through the use of “hell or high water” provisions requiring the buyer to do everything possible to secure regulatory approval. Such clauses appeared in 32% of our deals (and half of our PE exits) requiring merger control approval last year.

All this complexity is prolonging the deal execution process, with more than one fifth of private M&A deals worth more than USD100m taking longer than six months to reach completion in 2019, according to data.

Economic uncertainty also had an impact on deal terms. One notable change was the decline in our deals involving an earn-out, down from 20% in 2018 to just 9% last year, with sellers preferring a fixed cash price to a measure based on the target’s future performance.

Another clear trend was the growth, outside North America, of locked-box deals where there is no price adjustment as of closing, and the buyer bears the trading risk in, and retains the profits generated by, the target from the valuation date until the deal completes. In 2015, only 43% of our non-PE deals across the globe were done in this way; by last year, that figure had risen to 63%. Again, it may be that the late-cycle economy, and uncertainty as to when markets might turn, was leading sellers to lock in prices as early as possible.

In the five years leading up to 2018 we saw significant increases each year in the use of W&I insurance in PE sale processes, peaking at 71% of our PE exits. This figure stabilised at 62% in 2019, although remained much higher in some developed markets, such as Western Europe.

One change, evidenced from the transactions we were involved in, is that W&I insurance is gaining traction outside of PE exits, being used in 31% of sales by founders and 20% of disposals by corporates that we were involved in last year (up from 21% and 9% the year before). 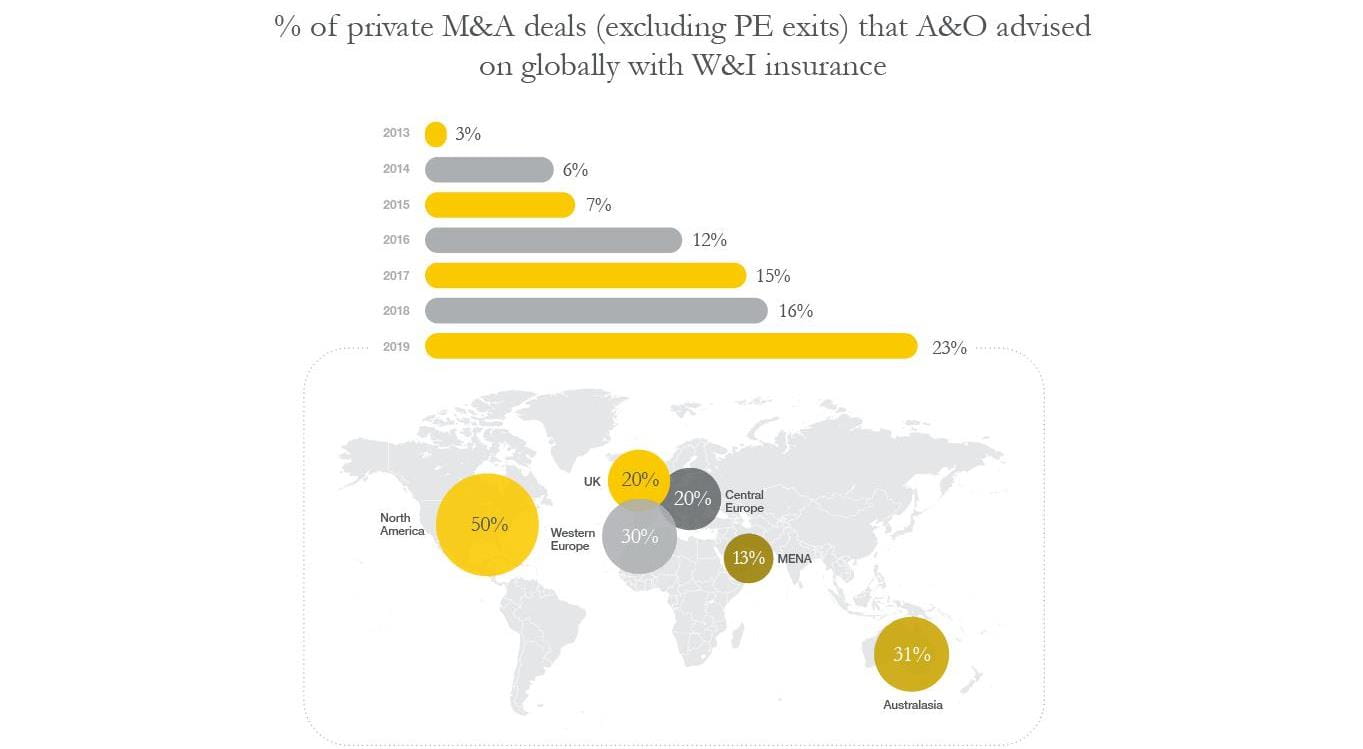 W&I insurance is gaining traction outside of PE exits, being used in 31% of sales by founders and 20% of disposals by corporates that we were involved in last year.

In 2018, we saw the peak of an extremely seller-friendly market for M&A deal terms, but last year the dynamics began to change, with buyers starting to reclaim some of the ground they had previously lost. Consequently, we saw stronger warranty and indemnity packages, more warranty repetition, higher liability caps, and longer time limits for bringing claims against a seller. In addition, some sellers lost a deal because they pushed too hard on deal terms: the market was no longer so hot that bidders will engage at any cost.

Although, as we have seen, protectionism was a growing theme in some developed markets – especially in the U.S. and parts of Europe – the drive to attract foreign investment in emerging and the riskiest “frontier” markets remained strong.

Given the precarious geopolitical situation in many parts of the world – a key factor behind the decline in cross-border deals last year – we looked for the first time at the different ways investors and sellers sought to protect themselves when doing deals in these diverse markets.

Our expectation was that buyers would exercise greater caution in the riskier markets and that turned out to be mostly true. Protections for the buyer between signing and closing, such as material adverse change and other termination rights and full warranty repetition, all became more common as the risk increased. Investors in riskier markets also insisted on higher liability caps and longer time limits on claims against sellers.

However, as well as buyers being wary of disaster scenarios that could wipe out the value of the target, sellers showed caution around post-deal value erosion at the lower end of the scale, with more locked-box arrangements and higher de minimis levels and thresholds in riskier markets.

While these trends are largely intuitive, they may help dealmakers hone their negotiating strategies and priorities when executing cross-border transactions.

For a full briefing on our survey of global trends in private M&A in 2019, please talk to your usual A&O contact.