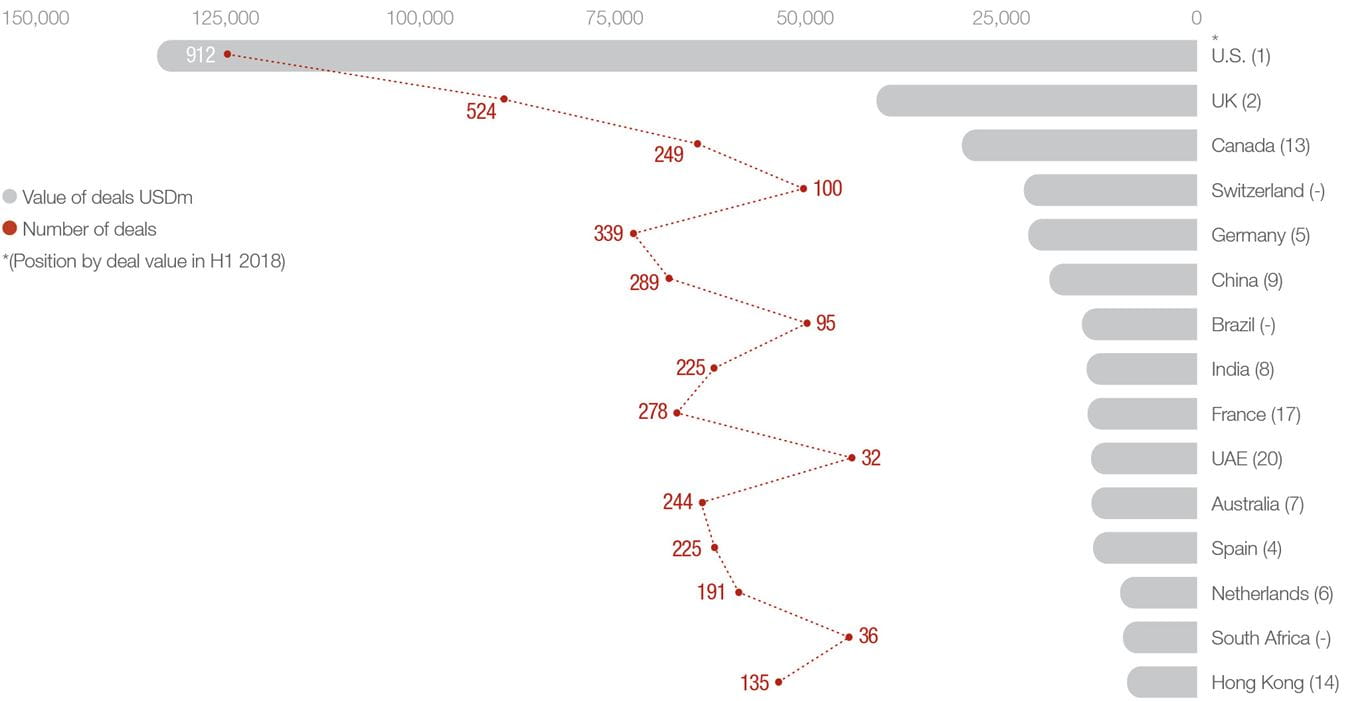 Despite declining investment activity at home, UK companies continue to do a significant number of outbound deals, with the U.S. and Germany highest on the list of target markets. Measured by number of deals, the UK ranked second only to the U.S. as the biggest overseas investor with 578 transactions so far this year.

Mid-sized, bolt-on deals appear to predominate rather than big, strategic transactions and not surprisingly they show a preference for familiar target markets. That makes economies offering good growth, access to sophisticated technologies and an accommodating approach to UK investment most attractive.

A weak pound may, slightly perversely, be another motivating factor to look overseas as many UK listed companies’ share prices are being bolstered by non-sterling earnings. Lack of clarity around the UK’s future trading relations with the EU and other economies post-Brexit is clearly not holding up M&A that can be done without trade agreements being in place.

For many investors into the UK, Brexit is an uncertainty that they are learning to live with and, for long-term investors such as pension and sovereign wealth funds, one they can look beyond, while taking immediate advantage of lower asset prices.

However, we have seen growing anxiety among Chinese investors around the increasing politicisation of trade policy. Most of that is focused on the U.S., of course. But, as new foreign direct investment regimes are introduced, including in the EU and the UK, worries that China may be locked out of key markets are becoming more widespread. In some key sectors, like semi-conductors, that could see companies choosing progressively to develop capabilities at home rather than investing in them overseas. 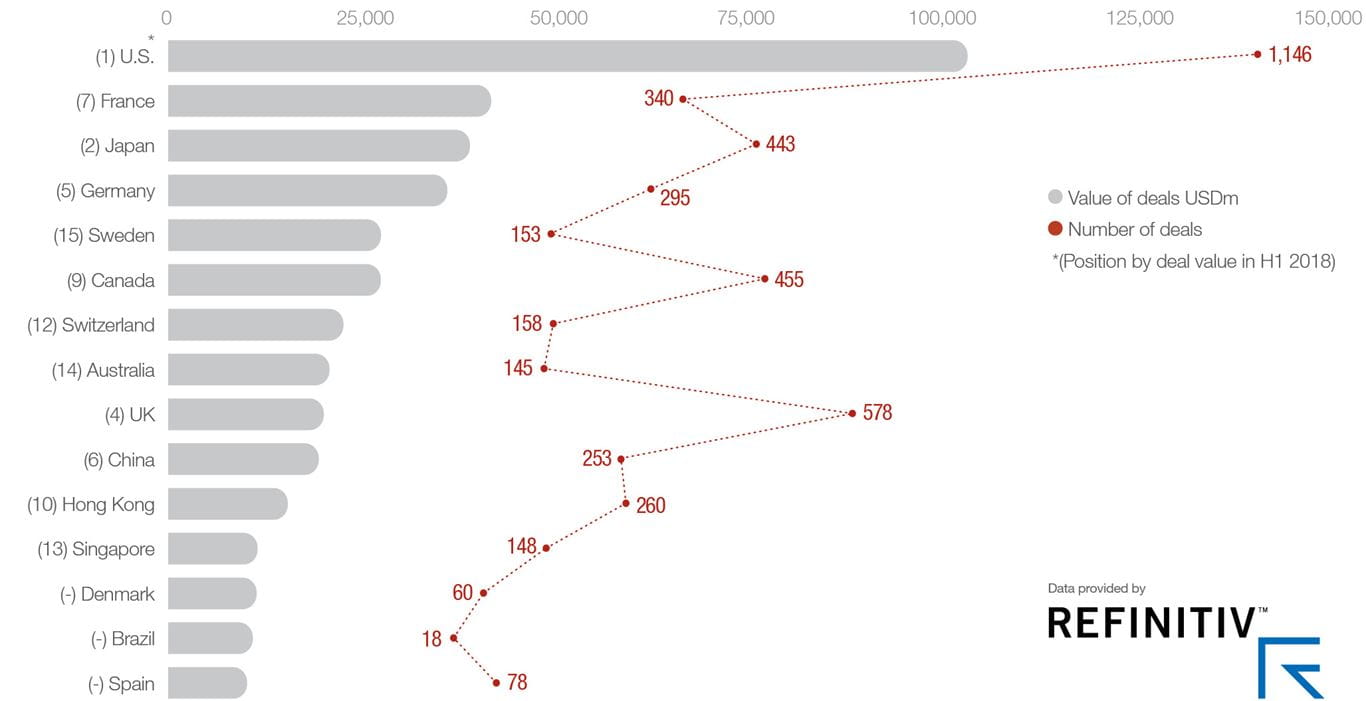 France shot to second place in the league table of cross-border acquirer nations in the first half of 2019, as some of its largest companies stepped up their global search for growth.

Measured by deal value, France trailed only the U.S. in outbound activity, its companies executing a series of bold, strategic transactions despite current political and economic uncertainties.

Total’s agreement to support Occidental’s bid for Anadarko by buying the latter’s African oil and gas assets for USD8.8bn, exemplifies the mood of many of France’s heaviest-hitting companies – a willingness to quickly seize transformational opportunities as they emerge.

Disruption and consolidation in the auto and media sectors also drove deals. Renault is considering a USD33bn merger proposal from Fiat Chrysler, while, on a smaller scale, auto-parts maker Faurecia has acquired Clarion, the Japanese maker of car navigation systems.

There were some major setbacks, not least the European Commission’s landmark decision to block the Siemens/Alsthom rail merger – leading to calls in France and Germany for new EU antitrust rules allowing for the creation of European Champions.

Investors remain relatively calm about the geo-political outlook, although there are worries about the China/U.S. trade war and rising energy prices.

Brexit has even receded as a concern and, with sterling weak, some are swooping on cheaper UK assets. Airport operator Vinci, for instance, spent GBP2.9bn to win control of Gatwick airport.

While there is concern over whether France and Germany can settle destabilising differences over the future leadership of the EU, there is no sign, yet, of companies delaying planned transactions in the face of such uncertainties. 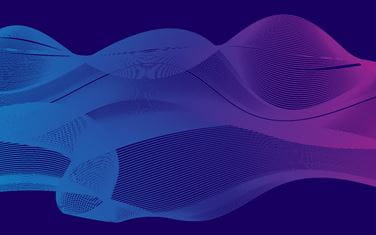 A turbulent but active year in Asia Pacific

While many commentators have predicted a downturn in Asia Pacific M&A activity this year, and the figures show a 9% drop in activity in the first half of the year, there are good reasons to believe there will still be many opportunities, within the region and globally, for investors who remain agile and ambitious.

Given political and regulatory uncertainty, there is no doubt the market will be challenging, but we do not anticipate a massive decline in transactions, and for several reasons.

The U.S./China trade war is having a clear impact not least on Chinese investment in the U.S. – down a staggering 80% in 2018. But, overall, China outbound activity has remained robust, with investors targeting more friendly markets in parts of Europe, Southeast Asia and “Belt and Road” countries. In the other direction, Beijing’s new Foreign Investment Law, coming into effect in 2020, should also spur inbound transactions into China.

With Chinese companies struggling to make headway in the U.S. that has also opened the way for other Asian investors to seize opportunities, notably increasingly ambitious and well-financed Japanese investors.

Japan itself is also proving an attractive hunting ground for inbound investors, as Japan undertakes large-scale restructuring and divestment efforts in response to a more active shareholder environment.

Southeast Asian markets continue to draw in foreign investment and a number of companies in key markets are now pursuing outbound opportunities as they grow.

Three types of disruption – regulatory, financial and technological – will pose challenges but also give rise to opportunities. Greater antitrust and other regulatory interventions will make completing deals more challenging, for sure. But the emergence of alternative funding sources – such as the provision of unregulated debt from credit funds often with liquidity provided by pension and sovereign wealth funds – means additional financing options are opening up.

The big tech companies continue to expand their platforms in the region, but increasingly we are seeing traditional industry players investing heavily in digitalisation, often through acquisitions or joint ventures.

Overall it adds up to a much more dynamic picture than some forecasters suggest. For that reason, we expect activity to remain buoyant with plenty of opportunities for investors who hold their nerve and stay nimble.