Marketing investment funds in the EU after AIFMD – a door ajar?

Directive 2011/61/EC on Alternative Investment Fund Managers (AIFMD) has been the subject of much speculation in the European fund industry. Many hoped AIFMD would create a uniform and harmonised European framework for the marketing of alternative investment funds (AIF) in the EU. It is now three months since its implementation date (22 July 2013) and a good moment to assess whether the marketing of AIFs has in fact become much easier under this new regime.

Unlike the Undertakings for Collective Investment in Transferable Securities Directives (UCITS) (which established an EU-harmonised fund product), the political context surrounding the enactment of AIFMD has not allowed a similar approach be taken for AIFs. AIFMD is therefore only a “manager” Directive aimed simply at directly regulating managers of AIFs (AIFM). The limits of such approach are plain when one assesses the differences in the marketing rules put in place across the EU.

As of mid-September 2013, AIFMD has been implemented in most major fund markets of the EU. With respect to the marketing rules, there is real divergence in the approach to implementation, with some jurisdictions adopting a far more flexible approach than others. Perhaps unsurprisingly, this flexible approach has been adopted in Luxembourg and Ireland and (though to a lesser extent), the UK. AIFMD has been implemented with a “neutral-to-conservative” approach to marketing in France, Germany and the Netherlands. However, some important markets such as Spain, Belgium, Norway and Finland have not implemented AIFMD at all, or only marginally to date. This implies that marketing rules in these countries remain unchanged and that the AIFMD passport cannot be used in those jurisdictions (or at least cannot be used easily – it remains arguable that the provisions regarding the passport contained in the Directive have “direct effect” within the meaning of the ECJ case law). The main change introduced by AIFMD in terms of marketing is the introduction of a European passport for AIFMD-compliant AIFs. This passport does not operate like the UCITS passport. The passport does not enable the passporting of AIFs irrespective of its AIFM. Under AIFMD, the marketing passport is based on the regulated status of the AIFM in charge of the management of the AIF. This “marketing passport” can also be combined with the “management passport” of the AIFM also introduced by AIFMD.

In short, duly licensed EU AIFMs (a currently licensed management company will be required to upgrade their licence to the AIFM status) may manage EU AIFs registered in their home Member State as well as in any other Member State (this management passport is very similar to the one introduced by the UCITS IV Directive). Such authorised EU AIFMs may freely market EU AIFs they manage in any Member State. In this context, Member States have no discretion to accept or oppose the marketing of the shares or units of these AIFs on their territory and are due to rely on the analysis run by the relevant home Member State. One critical point is that this marketing passport is restricted to non-retail investors only; ie to professional clients within the meaning of Markets in Financial Instruments Directive 2004/39 (MiFID). This marketing passport is indeed similar to the private placement regime deriving from the Prospectus Directive.

Beside the narrow path of this marketing passport, the AIFMD addresses a number of other scenarios such as the marketing of a non-EU AIFs managed by an EU AIFM, the marketing of AIFs based in the EU or not and managed by a non-EU AIFM. For most of these scenarios, AIFMD subjects the marketing to three conditions which can be summarised as follows: (i) the non-EU AIFM must comply with most organisational requirements applicable to AIFM pursuant to AIFMD; (ii) a cooperation agreement must have been entered into between the Member State where marketing is to take place and the home country of the AIFM and, if applicable, the AIF; and (iii) such a home country must not be listed as a “non-cooperative” country by Financial Action Task Force (FATF). AIFMD allows Member States (through their national regulator) a degree of discretion to interpret these three conditions. This is where the differences between flexible jurisdictions and more conservative jurisdictions become plain. For example, France has seized the opportunity offered in AIFMD to impose a fourth condition for open-ended non-EU AIFs. This condition consists of a prior approval requirement from the French regulator based on an assessment of the transparency and market security level offered by the non-EU AIF. We anticipate this approval will be hard to obtain. A lot of discrepancies also exist with respect to marketing to retail investors, a subject where AIFMD does not aim at harmonising rules amongst Member States and where each Member State has established a different regime.

Overall, it is already clear that AIFMD has changed the European fund landscape and will ease the marketing of EU AIFs to non-retail EU investors, even though national implementation may differ quite widely. However, beyond the relatively narrow scope of the marketing passport, as well as with respect to retail investors, national approaches to the opening or closing of their domestic markets remain unchanged. Indeed, in certain historically conservative jurisdictions, this tendency has been more pronounced. The rationale being that, now that an EU-based marketing passport exists, other paths formerly used should be restricted as much as possible. An example of this approach is Germany, which has abolished its private placement regime with a short grandfathering clause. A further example is France, where non-EU closed-ended funds could be marketed through private placement based on the Prospectus Directive, but will now be required to meet much tougher conditions.

Participants in the market will have to negotiate a divergent landscape for some time to come.

This map provides an overview of the status of implementation. 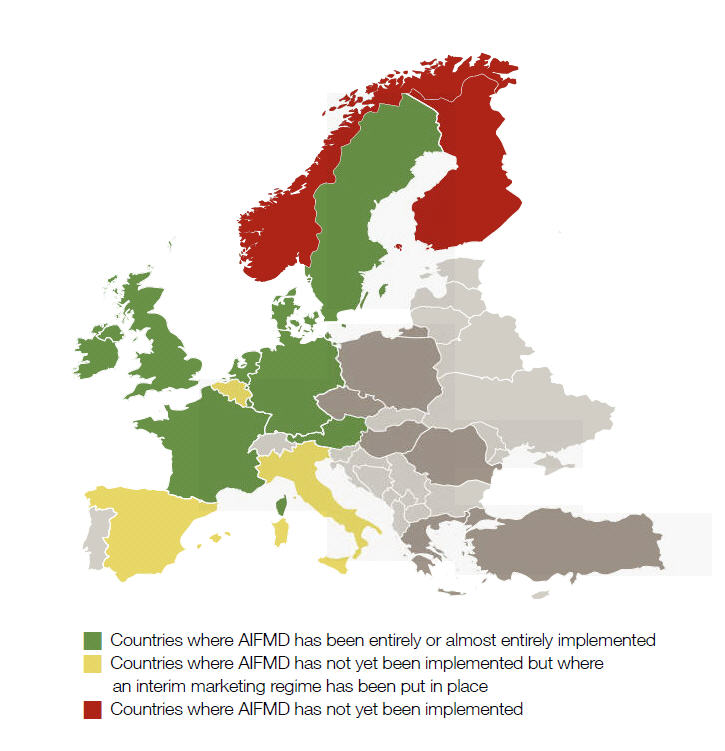