My turn to ask the SFO a few questions

Normally it is my clients who are on the receiving end of questions from the SFO, so I was delighted to be given the opportunity by GIR on Wednesday to be able to put some questions to the Director of the SFO, Lisa Osofsky,  about a number of issues that individuals and companies have been struggling with – leniency for cooperating witnesses, the fair treatment of witnesses in section 2 interviews by the SFO, and whether companies can interview key witnesses during internal investigations without being accused of ‘trampling on the crime scene’.  I will cover these questions and Lisa’s answers in a number of blogs over the coming days.  This one is on section 2 interviews.

I asked Lisa Osofsky about whether witnesses would be given better advance disclosure of documents before being interviewed by the SFO using its powers of compulsion (known as ‘section 2 interviews’).  I have been concerned for some time about the lack of disclosure in advance of these interviews, which can severely hinder a witness from giving accurate answers, and the lack of flexibility on these issues when you try to escalate it to the case controller level at the SFO.

The power to compel a witness to attend a section 2 interview is generally reserved for someone who the SFO has decided is not a suspect.  The SFO has the ability to compel answers to all questions, with only limited exceptions (privilege, banking confidentiality and a reasonable excuse).  There is no statutory requirement to provide documents and information in advance to the individual.  There is also no statutory definition of ‘reasonable excuse’, but it is highly unlikely to include lack of disclosure.

The penalty for not complying with a section 2 notice includes a custodial sentence of up to six months.   In addition, although a person has some protections from their answers being used against them in a subsequent criminal prosecution, they can be prosecuted for providing knowingly or recklessly misleading answers, with a maximum sentence on indictment of two years.

If an individual does not have access to relevant documents, notes and emails and is being asked to deal with events, in minute detail, that may have taken place a number of years ago, through no fault of the individual being interviewed, the answers that the SFO will be obtaining will not always be accurate. Regulators and investigators often refer to the need to get unfettered, accurate accounts from individuals before they have had a chance to go through the documents with their legal advisers.  Those of us who have spent time preparing individuals for interviews with regulators, particularly where the issues are historic, will know that you need contemporaneous documents to assist witnesses in their recollections and that, without access to these, the first account from a witness will often be inaccurate and incomplete.

Perhaps most importantly, it is difficult to judge whether the information the witness is providing pursuant to the section 2 notice is accurate and therefore whether there is a concern that their answers could be capable of being recklessly misleading, when you are hearing their account of a document for the first time on tape, in the windowless underground interview rooms at the SFO.  All of this increases liability and reputational risk for the individual and, if corporate liability is at stake, the company too.

The reason why this all matters so much is that if the person goes on to become a witness in subsequent proceedings, that person is vulnerable to cross examination, based on the interview transcripts, of all inconsistent answers he / she  has given.  Worse still, is the risk that the SFO may potentially be working on inaccurate information when making its charging decisions against individuals and corporates, as witnesses may have mis-remembered key details and not had the benefit of being able to build up an accurate picture in the way they could have done, had they had access to the relevant contemporaneous documents.

The view from the SFO

This was the background to my question to Lisa Osofsky, when I asked if there was a case for the SFO treating their witnesses better in this respect.  Lisa Osofsky explained that she is very focused on treating witnesses fairly, and that the SFO tries to give section 2 interviewees “as much information as possible to avoid any confusion”,  but sometimes decides not to for “operational reasons”.  It’s up to case teams, in the first instance, to decide how much information is shared with a potential witness. There may be instances where the SFO is interviewing witnesses before investigators have had the time to review all of the documents, or sometimes the SFO intentionally wants to retain the element of surprise.  In other instances, the lack of disclosure may be due to the SFO not wanting to impugn someone else.  At the same time, however, Lisa Osofsky noted that the SFO does have escalation processes and channels so that due process issues can be raised. “If you [the lawyer] see that something isn’t working, ask,” she said.

It is certainly helpful to have SFO confirmation that it does not have a general deliberate policy of avoiding advance disclosure in compelled interviews, and that these sorts of issues should be escalated, if there are concerns.   In view of this, I very much hope we will see a reversal of the recent trend of minimal advance disclosure in these interviews.

Eve Giles interviewed Lisa Osofsky at the 2nd Annual GIR Live Women in Investigations conference held on 12 June.  The next blog post from Eve will be on the topic of providing leniency to cooperating witnesses. 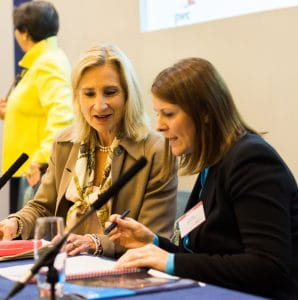