What is the world coming to? Guerrilla Girls, Feminist Fight Clubs and full-on initiatives to catapult women into the limelight and along the pipeline to serious senior positions. Whatever next?

Wandering around the Tate Modern last week, I smiled wryly when I came across the posters by the Guerrilla Girls – a group of American gorilla mask-wearing female artists who fight sexual and racial discrimination through humour, activism and the arts. One of their posters shows a reclining naked woman wearing a gorilla mask with the headline “Do women have to get naked to get into the Met Museum?” Beneath the image, it explains that fewer that 5% of the artists in the Modern Art sections are women, but 85% of the nudes are female. Funny that! 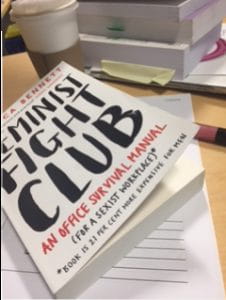 Much more than a wry smile was my reaction to Jessica Bennett’s recent publication Feminist Fight Club, an office survival manual for a sexist workplace. (This is definitely one for my all-female book group.) According to Ms Bennett and the research she relies on, the real sexism in workplaces is subtle and mostly occurs under the radar, thus making it persistent and intangible. Unlike Sandberg’s Lean In, which targets women who are hitting the glass ceiling, Fight Club reaches out to millennials on the start of their journey. It comes as no surprise then that a whole new language has been created to capture conduct that personifies workplace sexism (though it uses considerably more characters than texting lingo or emojis). Examples include:

Feminist Fight Club is both irreverent and hilarious, but don’t be fooled – it does contain serious stuff too, giving useful tips and examples for battling workplace sexism. Oh and by the way, more than fifty pages are devoted to female self-sabotage.

At the opposite end of the spectrum are the vast array of initiatives, promises and pledges that were published recently by most of the signatories the Women in Finance Charter. I was astounded at the level of commitment and creativity. Thirteen organisations are aiming for complete gender parity in senior roles – yes, a 50/50 split, and sixty organisations have committed publicly to having 30% women in senior roles within the next five years. That’s progress.

So what is the world coming to? It seems clear to me that it is waking up to the benefits of diversity and equality. Smart organisations know that success doesn’t come from group think, homogeneity or resistance to change. It’s true that not everyone is coming to it with the same approach. Some use humour, others fisticuffs. Some are taking it slowly and others have picked up the pace. But the destination is the same. Whatever next?