Black man in a hoody

I was curious. As I entered the foyer at work this morning, the first thing I saw was a black man in a hoodie. The second thing I saw was the person. This man’s name is Ade Ahamadu, a financial services project manager and co-founder of McJonathan. His photo is joined by 55 other black men in hoodies, whose professions range from politician to physiotherapist. The photographic exhibition and campaign entitled 56 Black Men by Cephas Williams sets out to challenge the dangerous stereotype of ‘the black man’ and the negative connotations and stigma attached to the cliché image of black men wearing a hoody. Every single one of these 56 men have successful careers, which, according to the campaign, is generally the opposite of what society has been conditioned to expect of a black man. It points out that this is reflected through the lack of black representation in the workplace too. 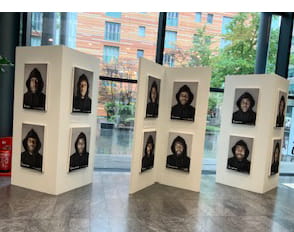 Cephas is right. Stereotypes are dangerous. They operate across all protected characteristics and many that have not received legal protection yet. They can seep into decision-making, often sub-consciously, resulting in the person not getting the job or promotion, correct performance rating, recognition or equal pay. Or, conversely, individuals are favoured because they look like or share other characteristics with the decision-maker.

We all have unconscious biases. The brain is programmed to make decisions based on visual cues instantly. It might be someone’s accent, how they dress, their hobbies or how they look at you. To overcome prejudice and discrimination, we need to pause. Good decision-making takes time and is based on conscious, reasoned and controlled criteria. Instinctive reactions like “she’s not a good fit” or “I can’t put my finger on it ….” are indicators that unconscious bias is at work, making it difficult to articulate the reason behind the decision. Going through the discipline of documenting the ‘why’ behind the decision before it is made, ensuring that it is referenced to objective criteria, will help to bring rigour to the process.

The next time I see a black man in a hoodie in my workplace or even #56BlackMen, I know I will still be curious. But I hope the first thing I see is the person.